Cancer is considered to have an adverse influence on health around the world. Chitosan, a linear polysaccharide that contains copolymers of β-1-4 linked d-glucosamine and N-acetyl-d-glucosamine units, has been widely used in the field of biomedicine, owing to its nontoxicity, biocompatibility, biodegradability, and hemocompatibility. This study was aimed at preparing the chitosan oligosaccharides (COS) and examining its ability on suppressing lung cancer in vitro and in vivo. Human non-small-cell lung cancer A549 cells model and C57BL/6 mice bearing lung cancer model were adopted. COS showed inhibition on the viability and proliferation of lung carcinoma cells (A549) in time-dependent manners, but no cytotoxicity to human liver cell (HL-7702). Moreover, COS could significantly increase Bax expression of A549 cells while decreasing Bcl-2 expression. COS supplementation significantly inhibited the growth of Lewis tissues and promoted necrosis of tumor cells in vivo. After treatment with COS, significantly elevated concentrations of Bax and reduced expression of Bcl-2 in tumor tissues, as well as elevated levels of TNF-α, IL-2, Fas and Fas-L in mice serum were observed (p < 0.05). In conclusion, COS had certain anti-tumor effects and potential application as a synergic functional food ingredient to prevent cancer. View Full-Text
Keywords: chitosan oligosaccharide; anti-tumor; cytotoxicity; functional chitosan oligosaccharide; anti-tumor; cytotoxicity; functional
►▼ Show Figures 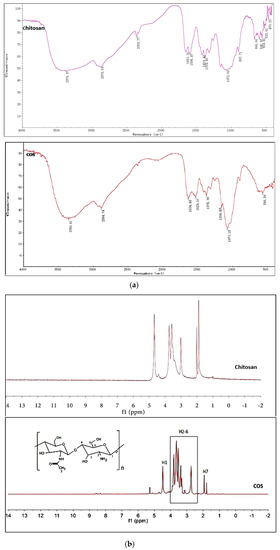