A Novel Rare Missense Variation of the NOD2 Gene: Evidences of Implication in Crohn’s Disease

The NOD2 gene, involved in innate immune responses to bacterial peptidoglycan, has been found to be closely associated with Crohn’s Disease (CD), with an Odds Ratio ranging from 3–36. Families with three or more CD-affected members were related to a high frequency of NOD2 gene variations, such as R702W, G908R, and 1007fs, and were reported in the EPIMAD Registry. However, some rare CD multiplex families were described without identification of common NOD2 linked-to-disease variations. In order to identify new genetic variation(s) closely linked with CD, whole exome sequencing was performed on available subjects, comprising four patients in two generations affected with Crohn’s disease without R702W and G908R variation and three unaffected related subjects. A rare and, not yet, reported missense variation of the NOD2 gene, N1010K, was detected and co-segregated across affected patients. In silico evaluation and modelling highlighted evidence for an adverse effect of the N1010K variation with regard to CD. Moreover, cumulative characterization of N1010K and 1007fs as a compound heterozygous state in two, more severe CD family members strongly suggests that N1010K could well be a new risk factor involved in Crohn’s disease genetic susceptibility. View Full-Text
Keywords: Crohn’s disease; NOD2 gene; variation; WES Crohn’s disease; NOD2 gene; variation; WES
►▼ Show Figures 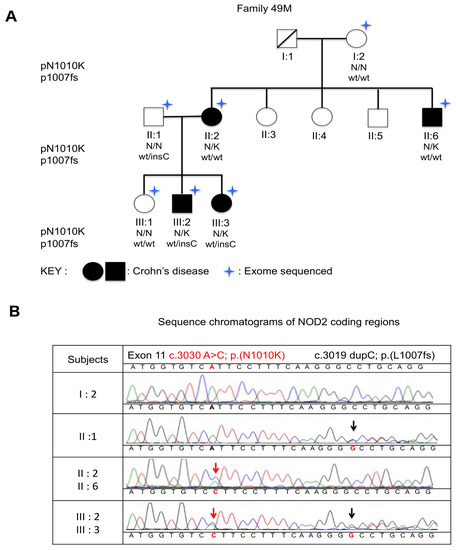