Malignant melanoma is a highly aggressive form of skin cancer which has a propensity for metastasis. Epithelial mesenchymal transition (EMT) plays a primordial role in the progression of metastatic disease. Metastatic melanoma is resistant to conventional therapies. Hence, researchers have been exploring alternative approaches, including the utility of bioactive phytochemicals to manage metastatic disease. In the present study, we investigated the potential of cirsiliol, a flavonoid isolated from Centaurea jacea L., in modulating the aggressive behavior of B16F10 metastatic melanoma cells, including EMT, and associated molecular mechanisms of action. Cirsiliol was found to be effective in restraining the colony formation and migration of fibronectin-induced B16F10 metastatic melanoma cells. Cirsiliol inhibited the activity and expression of matrix metalloproteinase-9 (MMP-9). Cirsiliol also suppressed the phosphatidylinositol-3-kinase (PI3K)/protein kinase B (also known as Akt)/nuclear factor-κB (NF-κB) signaling pathway which, in turn, caused upregulation of E-cadherin and downregulation of N-cadherin, Snail and Twist. Based on these results, cirsiliol may be considered a promising compound against EMT in the therapeutic management of malignant melanoma. View Full-Text
Keywords: melanoma; Centaurea jacea; cirsiliol; EMT; cadherin; MMP-9; PI3K; Akt; NF-κB melanoma; Centaurea jacea; cirsiliol; EMT; cadherin; MMP-9; PI3K; Akt; NF-κB
►▼ Show Figures 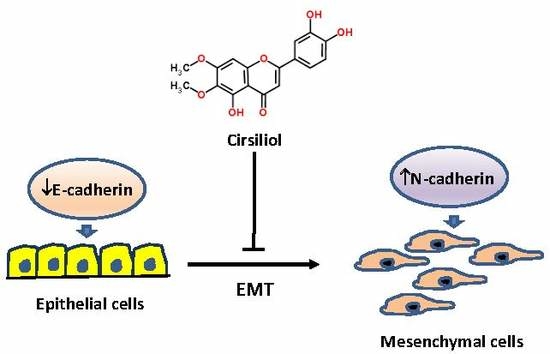