Grape hyacinth (Muscari spp.) is a popular ornamental plant with bulbous flowers noted for their rich blue color. Muscari species have been thought to accumulate delphinidin and cyanidin rather than pelargonidin-type anthocyanins because their dihydroflavonol 4-reductase (DFR) does not efficiently reduce dihydrokaempferol. In our study, we clone a novel DFR gene from blue flowers of Muscari. aucheri. Quantitative real-time PCR (qRT-PCR) and anthocyanin analysis showed that the expression pattern of MaDFR had strong correlations with the accumulation of delphinidin, relatively weak correlations with cyanidin, and no correations with pelargonidin. However, in vitro enzymatic analysis revealed that the MaDFR enzyme can reduce all the three types of dihydroflavonols (dihydrokaempferol, dihydroquercetin, and dihydromyricetin), although it most preferred dihydromyricetin as a substrate to produce leucodelphinidin, the precursor of blue-hued delphinidin. This indicated that there may be other functional genes responsible for the loss of red pelargonidin-based pigments in Muscari. To further verify the substrate-specific selection domains of MaDFR, an assay of amino acid substitutions was conducted. The activity of MaDFR was not affected whenever the N135 or E146 site was mutated. However, when both of them were mutated, the catalytic activity of MaDFR was lost completely. The results suggest that both the N135 and E146 sites are essential for the activity of MaDFR. Additionally, the heterologous expression of MaDFR in tobacco (Nicotiana tabacum) resulted in increasing anthocyanin accumulation, leading to a darker flower color, which suggested that MaDFR was involved in color development in flowers. In summary, MaDFR has a high preference for dihydromyricetin, and it could be a powerful candidate gene for genetic engineering for blue flower colour modification. Our results also make a valuable contribution to understanding the basis of color variation in the genus Muscari. View Full-Text
Keywords: anthocyanin biosynthesis; dihydroflavonol 4-reductase; enzymatic reaction; flower color; grape hyacinth anthocyanin biosynthesis; dihydroflavonol 4-reductase; enzymatic reaction; flower color; grape hyacinth
►▼ Show Figures 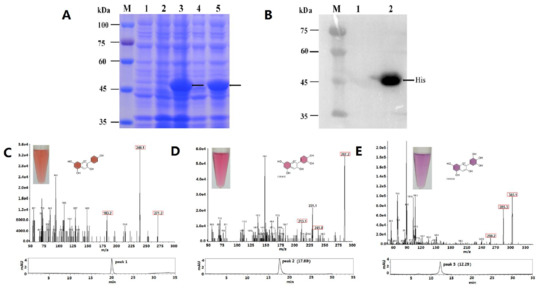