YaeB, Expressed in Response to the Acidic pH in Macrophages, Promotes Intracellular Replication and Virulence of Salmonella Typhimurium
Previous Article in Special Issue

Aberrantly high levels of tyrosine-phosphorylated signal transducer and activator of transcription 3 (p-STAT3) are found constitutively in ~50% of human lung and breast cancers, acting as an oncogenic transcription factor. We previously demonstrated that Manuka honey (MH) inhibits p-STAT3 in breast cancer cells, but the exact mechanism remained unknown. Herein, we show that MH-mediated inhibition of p-STAT3 in breast (MDA-MB-231) and lung (A549) cancer cell lines is accompanied by decreased levels of gp130 and p-JAK2, two upstream components of the IL-6 receptor (IL-6R) signaling pathway. Using an ELISA-based assay, we demonstrate that MH binds directly to IL-6Rα, significantly inhibiting (~60%) its binding to the IL-6 ligand. Importantly, no evidence of MH binding to two other cytokine receptors, IL-11Rα and IL-8R, was found. Moreover, MH did not alter the levels of tyrosine-phosphorylated or total Src family kinases, which are also constitutively activated in cancer cells, suggesting that signaling via other growth factor receptors is unaffected by MH. Binding of five major MH flavonoids (luteolin, quercetin, galangin, pinocembrin, and chrysin) was also tested, and all but pinocembrin could demonstrably bind IL-6Rα, partially (30–35%) blocking IL-6 binding at the highest concentration (50 μM) used. In agreement, each flavonoid inhibited p-STAT3 in a dose-dependent manner, with estimated IC50 values in the 3.5–70 μM range. Finally, docking analysis confirmed the capacity of each flavonoid to bind in an energetically favorable configuration to IL-6Rα at a site predicted to interfere with ligand binding. Taken together, our findings identify IL-6Rα as a direct target of MH and its flavonoids, highlighting IL-6R blockade as a mechanism for the anti-tumor activity of MH, as well as a viable therapeutic target in IL-6-dependent cancers. View Full-Text
Keywords: Manuka honey; Flavonoids; IL-6 receptor; STAT3; IL-6; breast and lung cancers Manuka honey; Flavonoids; IL-6 receptor; STAT3; IL-6; breast and lung cancers
►▼ Show Figures 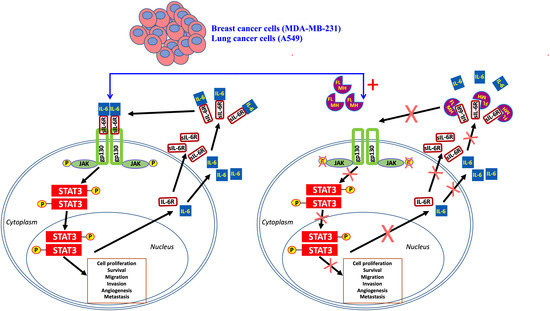