Anti-Apoptotic and Anti-Oxidant Proteins in Glioblastomas: Immunohistochemical Expression of Beclin and DJ-1 and Its Correlation with Prognosis

DJ-1 deglycase is a protein with anti-oxidative and anti-apoptotic properties and its role in oncogenesis is controversial. Indeed in primary breast cancer and non-small-cell lung carcinoma, its higher expression was shown in more aggressive tumors while in other neoplasms (e.g., pancreatic adenocarcinoma), higher expression was related to better prognosis. Beclin has a relevant role in autophagy and cellular death regulation, processes that are well known to be impaired in neoplastic cells. DJ-1 shows the ability to modulate signal transduction. It can modulate autophagy through many signaling pathways, a process that can mediate either cell survival or cell death depending on the circumstances. Previously, it has been suggested that the involvement of DJ-1 in autophagy regulation may play a role in tumorigenesis. The aim of our study was to investigate the link between DJ-1 and Beclin-1 in glioblastoma through the immunohistochemical expression of such proteins and to correlate the data obtained with prognosis. Protein expression was assessed by immunohistochemistry and the immunoscores were correlated with clinicopathologic parameters. Kaplan–Meier survival curves were generated. A statistically significant association between DJ-1 score and recurrence (p = 0.0189) and between the former and Isocitrate Dehydrogenase 1 (IDH1) mutation (p = 0.0072) was observed. Kaplan–Meier survival curve analysis revealed that a higher DJ-1 score was associated with longer overall survival (p = 0.0253, ĸ2 = 5.005). Furthermore, an unexpected direct correlation (p = 0.0424, r = 0.4009) between DJ-1 and Beclin score was evident. The most significant result of the present study was the evidence of high DJ-1 expression in IDH-mutant tumors and in cases with longer overall survival. This finding could aid, together with IDH1, in the identification of glioblastomas with better prognosis. View Full-Text
Keywords: cell apoptosis; autophagy; glioblastoma; IDH1 cell apoptosis; autophagy; glioblastoma; IDH1
►▼ Show Figures 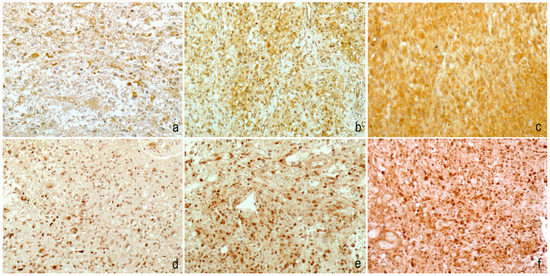