Women with pregnancies complicated by preeclampsia appear to be at increased risk of metabolic and vascular diseases in later life. Previous research has also indicated disturbed cardiorespiratory adaptation during pregnancy. The aim of this study was to follow up on the physiological stress response in preeclampsia several weeks postpartum. A standardized laboratory test was used to illustrate potential deviations in the physiological stress responding to mildly stressful events of the kind and intensity in which they regularly occur in further everyday life after pregnancy. Fifteen to seventeen weeks postpartum, 35 women previously affected by preeclampsia (19 mild, 16 severe preeclampsia), 38 women after uncomplicated pregnancies, and 51 age-matched healthy controls were exposed to a self-relevant stressor in a standardized stress-reactivity protocol. Reactivity of blood pressure, heart rate, stroke index, and systemic vascular resistance index as well as baroreceptor sensitivity were analyzed. In addition, the mutual adjustment of blood pressure, heart rate, and respiration, partitioned for influences of the sympathetic and the parasympathetic branches of the autonomic nervous system, were quantified by determining their phase synchronization. Findings indicated moderately elevated blood pressure levels in the nonpathological range, reduced stroke volume, and elevated systemic vascular resistance in women previously affected by preeclampsia. Despite these moderate abnormalities, at the time of testing, women with previous preeclampsia did not differ from the other groups in their physiological response patterns to acute stress. Furthermore, no differences between early, preterm, and term preeclampsia or mild and severe preeclampsia were observed at the time of testing. The findings suggest that the overall cardiovascular responses to moderate stressors return to normal in women who experience a pregnancy with preeclampsia a few weeks after delivery, while the operating point of the arterial baroreflex is readjusted to a higher pressure. Yet, their regulation mechanisms may remain different. View Full-Text
Keywords: pregnancy complications; vagal withdrawal; baroreflex sensitivity; blunted cardiac response; cardiovascular adaptations; autonomic nervous system pregnancy complications; vagal withdrawal; baroreflex sensitivity; blunted cardiac response; cardiovascular adaptations; autonomic nervous system
►▼ Show Figures 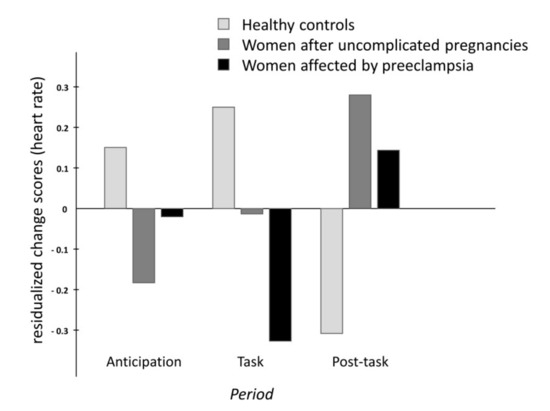