Effects of Polyphenols on Thermogenesis and Mitochondrial Biogenesis

The cross-talk between skeletal muscle and adipose tissue is involved in the development of insulin resistance (IR) in skeletal muscle, leading to the decrease in the anabolic effect of insulin. We investigated if the long chain polyunsaturated n-3 fatty acids (LCn-3PUFA), eicosapentaenoic and docosapentaenoic acids (EPA and DPA, respectively) could (1) regulate the development of IR in 3T3-L1 adipocytes and C2C12 muscle cells and (2) inhibit IR in muscle cells exposed to conditioned media (CM) from insulin-resistant adipocytes. Chronic insulin (CI) treatment of adipocytes and palmitic acid (PAL) exposure of myotubes were used to induce IR in the presence, or not, of LCn-3PUFA. EPA (50 µM) and DPA (10 µM) improved PAL-induced IR in myotubes, but had only a partial effect in adipocytes. CM from adipocytes exposed to CI induced IR in C2C12 myotubes. Although DPA increased the mRNA levels of genes involved in fatty acid (FA) beta-oxidation and insulin signaling in adipocytes, it was not sufficient to reduce the secretion of inflammatory cytokines and prevent the induction of IR in myotubes exposed to adipocyte’s CM. Treatment with DPA was able to increase the release of adiponectin by adipocytes into CM. In conclusion, DPA is able to protect myotubes from PAL-induced IR, but not from IR induced by CM from adipocytes. View Full-Text
Keywords: insulin resistance; omega-3 fatty acids; adipocytes; myotubes; conditioned media insulin resistance; omega-3 fatty acids; adipocytes; myotubes; conditioned media
►▼ Show Figures 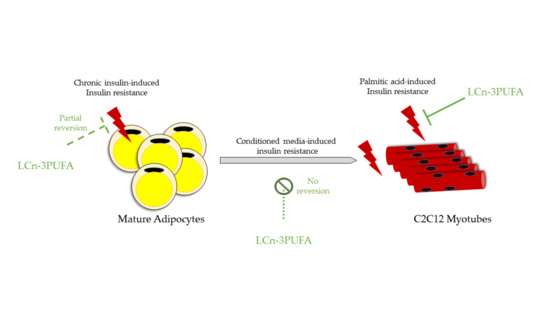