Cynoglossus semilaevis is an important economic fish species and has long been cultivated in China. Since the completion of its genome and transcriptome sequencing, genes relating to C. semilaevis development have been extensively studied. R-spondin 3 (Rspo3) is a member of the R-spondin family. It plays an important role in biological processes such as vascular development and oncogenesis. In this study, we cloned and characterized the expression patterns and functions of C. semilaevisRspo3. Initial structural and phylogenetic analyses revealed a unique FU3 domain that exists only in ray-finned fish RSPO3. Subsequent embryonic expression profile analysis showed elevating expression of Rspo3 from gastrulation to the formation of the eye lens, while, in tail bud embryos, Rspo3 expression was significantly high in the diencephalon and mesencephalon. The overexpression of C. semilaevis Rspo3 in Danio rerio embryos resulted in a shortened rostral–caudal axis, edema of the pericardial cavity, stubby yolk extension, and ecchymosis. Vascular anomalies were also observed, which is consistent with Rspo3 role in vascular development. Drug treatment and a dual-luciferase reporter assay confirmed the inhibitory role of C. semilaevis Rspo3 in D. rerio Wnt/β-catenin signaling pathway. We further concluded that the FU2, FU3, and TSP1 domains regulate the maternal Wnt/β-catenin signaling pathway, while the FU1 domain regulates the zygotic Wnt/β-catenin signaling pathway. This study enriches Rspo3 research in non-model animals and serves as the basis for further research into the interactions between Rspo and the Wnt/β-catenin signaling pathway. View Full-Text
Keywords: RT-PCR; epiboly; vascular development; cysteine-rich furin-like domain; tongue sole RT-PCR; epiboly; vascular development; cysteine-rich furin-like domain; tongue sole
►▼ Show Figures 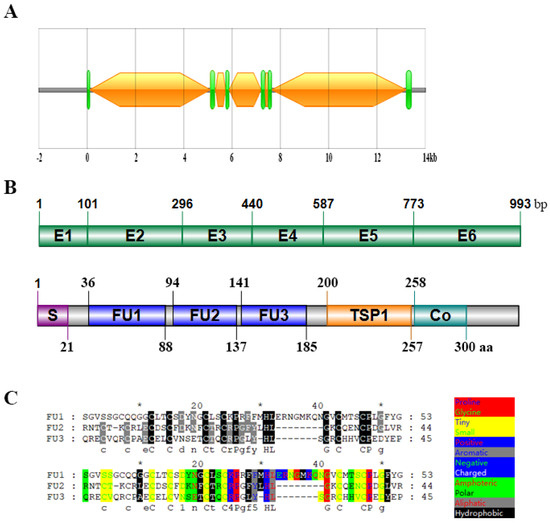