Endocrine Disruption at the Androgen Receptor: Employing Molecular Dynamics and Docking for Improved Virtual Screening and Toxicity Prediction
Next Article in Special Issue

Regulation and Evolution of NLR Genes: A Close Interconnection for Plant Immunity

Some herbivores suppress plant defenses, which may be viewed as a result of the coevolutionary arms race between plants and herbivores. However, this ability is usually studied in a one-herbivore-one-plant system, which hampers comparative studies that could corroborate this hypothesis. Here, we extend this paradigm and ask whether the herbivorous spider-mite Tetranychus evansi, which suppresses the jasmonic-acid pathway in tomato plants, is also able to suppress defenses in other host plants at different phylogenetic distances from tomatoes. We test this using different plants from the Solanales order, namely tomato, jimsonweed, tobacco, and morning glory (three Solanaceae and one Convolvulaceae), and bean plants (Fabales). First, we compare the performance of T. evansi to that of the other two most-commonly found species of the same genus, T. urticae and T. ludeni, on several plants. We found that the performance of T. evansi is higher than that of the other species only on tomato plants. We then showed, by measuring trypsin inhibitor activity and life history traits of conspecific mites on either clean or pre-infested plants, that T. evansi can suppress plant defenses on all plants except tobacco. This study suggests that the suppression of plant defenses may occur on host plants other than those to which herbivores are adapted. View Full-Text
Keywords: plant-herbivore interactions; solanales; tetranychidae; host-plant adaptation plant-herbivore interactions; solanales; tetranychidae; host-plant adaptation
►▼ Show Figures 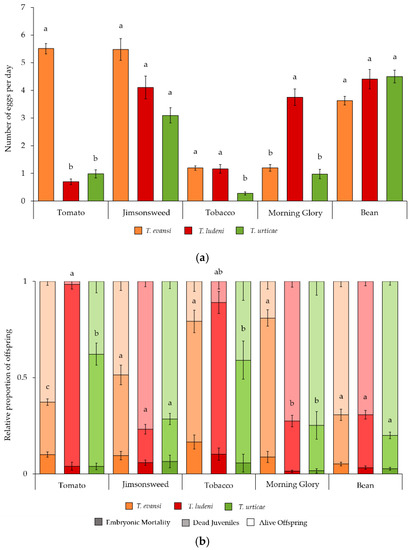