Metabolic Reprogramming in Chloroplasts under Heat Stress in Plants

Ailanthus altissima (Mill.) Swingle (Simaroubaceae) is a deciduous tree widely distributed throughout temperate regions in China, hence suitable for genetic diversity and evolutionary studies. Previous studies in A. altissima have mainly focused on its biological activities, genetic diversity and genetic structure. However, until now there is no published report regarding genome of this plant species or Simaroubaceae family. Therefore, in this paper, we first characterized A. altissima complete chloroplast genome sequence. The tree of heaven chloroplast genome was found to be a circular molecule 160,815 base pairs (bp) in size and possess a quadripartite structure. The A. altissima chloroplast genome contains 113 unique genes of which 79 and 30 are protein coding and transfer RNA (tRNA) genes respectively and also 4 ribosomal RNA genes (rRNA) with overall GC content of 37.6%. Microsatellite marker detection identified A/T mononucleotides as majority SSRs in all the seven analyzed genomes. Repeat analyses of seven Sapindales revealed a total of 49 repeats in A. altissima, Rhus chinensis, Dodonaea viscosa, Leitneria floridana, while Azadirachta indica, Boswellia sacra, and Citrus aurantiifolia had a total of 48 repeats. The phylogenetic analysis using protein coding genes revealed that A. altissima is a sister to Leitneria floridana and also suggested that Simaroubaceae is a sister to Rutaceae family. The genome information reported here could be further applied for evolution and invasion, population genetics, and molecular studies in this plant species and family. View Full-Text
Keywords: Ailanthus altissima; chloroplast genome; microsatellites; Simaroubaceae; Sapindales Ailanthus altissima; chloroplast genome; microsatellites; Simaroubaceae; Sapindales
►▼ Show Figures 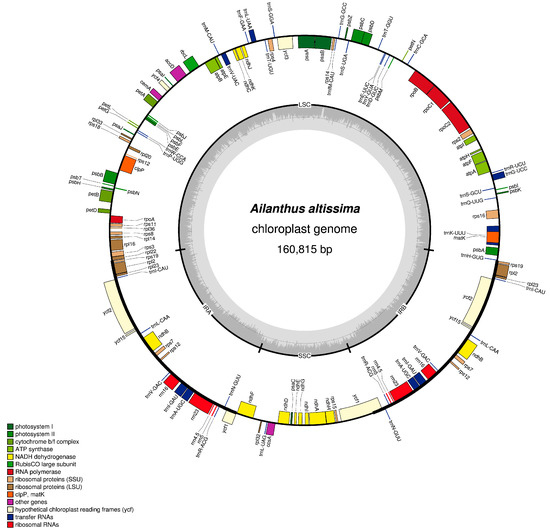