The space radiation environment includes helium (4He) ions that may impact brain function. As little is known about the effects of exposures to 4He ions on the brain, we assessed the behavioral and cognitive performance of C57BL/6J × DBA2/J F1 (B6D2F1) mice three months following irradiation with 4He ions (250 MeV/n; linear energy transfer (LET) = 1.6 keV/μm; 0, 21, 42 or 168 cGy). Sham-irradiated mice and mice irradiated with 21 or 168 cGy showed novel object recognition, but mice irradiated with 42 cGy did not. In the passive avoidance test, mice received a slight foot shock in a dark compartment, and latency to re-enter that compartment was assessed 24 h later. Sham-irradiated mice and mice irradiated with 21 or 42 cGy showed a higher latency on Day 2 than Day 1, but the latency to enter the dark compartment in mice irradiated with 168 cGy was comparable on both days. 4He ion irradiation, at 42 and 168 cGy, reduced the levels of the dendritic marker microtubule-associated protein-2 (MAP-2) in the cortex. There was an effect of radiation on apolipoprotein E (apoE) levels in the hippocampus and cortex, with higher apoE levels in mice irradiated at 42 cGy than 168 cGy and a trend towards higher apoE levels in mice irradiated at 21 than 168 cGy. In addition, in the hippocampus, there was a trend towards a negative correlation between MAP-2 and apoE levels. While reduced levels of MAP-2 in the cortex might have contributed to the altered performance in the passive avoidance test, it does not seem sufficient to do so. The higher hippocampal and cortical apoE levels in mice irradiated at 42 than 168 cGy might have served as a compensatory protective response preserving their passive avoidance memory. Thus, there were no alterations in behavioral performance in the open filed or depressive-like behavior in the forced swim test, while cognitive impairments were seen in the object recognition and passive avoidance tests, but not in the contextual or cued fear conditioning tests. Taken together, the results indicate that some aspects of cognitive performance are altered in male mice exposed to 4He ions, but that the response is task-dependent. Furthermore, the sensitive doses can vary within each task in a non-linear fashion. This highlights the importance of assessing the cognitive and behavioral effects of charged particle exposure with a variety of assays and at multiple doses, given the possibility that lower doses may be more damaging due to the absence of induced compensatory mechanisms at higher doses. View Full-Text
Keywords: object recognition; passive avoidance; fear conditioning; MAP-2; galactic cosmic radiation; helium ions object recognition; passive avoidance; fear conditioning; MAP-2; galactic cosmic radiation; helium ions
►▼ Show Figures 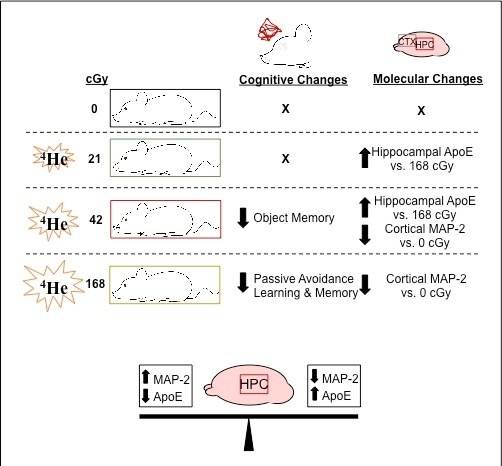