Effects of Different Metals on Photosynthesis: Cadmium and Zinc Affect Chlorophyll Fluorescence in Durum Wheat
Next Article in Special Issue

The pathogenesis of multiple sclerosis (MS) has not been clarified. In addition to environmental factors; genetic determinants have been implicated in the pathogenesis of MS. Furthermore, endogenous retroviruses (ERV) might play a role in MS. The presence of oligoclonal immunoglobulin in cerebrospinal fluid (CSF) is a typical feature of MS. Recently, genetic polymorphisms in loci on human chromosomes 6, 14 and 18 have been identified as major determinants of CSF antibody levels in MS. The functional relevance of these single nucleotide polymorphisms (SNPs) remains unclear and none of them is located in an open reading frame. In previous studies, we identified ERV sequences in the vicinity of MS associated SNPs. Here, we describe the identification of ERV sequences in the neighborhood of SNPs associated with CSF antibody levels. All of the identified SNPs are located in the vicinity of ERV sequences. One of these sequences has very high homology to a sequence derived from the so-called MS-associated retrovirus (MSRV). Another cluster of three ERV sequences from the immunoglobulin heavy chain locus has retained the typical organization of retroviral genomes. These observations might shed new light on a possible association between ERVs and MS pathogenesis. View Full-Text
Keywords: multiple sclerosis; oligoclonal bands; immunoglobulin G index; genetic determinants; endogenous retrovirus (ERV) multiple sclerosis; oligoclonal bands; immunoglobulin G index; genetic determinants; endogenous retrovirus (ERV)
►▼ Show Figures 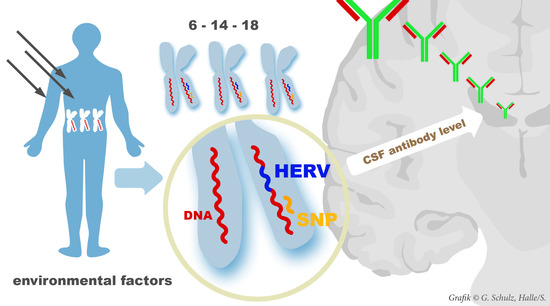