Animal Models of the Neuromuscular Junction, Vitally Informative for Understanding Function and the Molecular Mechanisms of Congenital Myasthenic Syndromes
Previous Article in Journal

Fundamental Molecules and Mechanisms for Forming and Maintaining Neuromuscular Synapses

Neurophysiological Assessment of Abnormalities of the Neuromuscular Junction in Children

The function of the neuromuscular junction in children is amenable to electrophysiological testing. Of the two tests available, repetitive nerve stimulation is uncomfortable and has a reduced sensitivity compared with single-fibre methodology. The latter is the method of choice, recording the variability in neuromuscular transmission as a value called jitter. It can be performed by voluntary activation of the muscle being examined, which is not suitable in children, or by stimulation techniques. A modification of these techniques, called Stimulated Potential Analysis with Concentric needle Electrodes (SPACE), is well tolerated and can be performed while the child is awake. It has a high sensitivity (84%) for the diagnosis of neuromuscular transmission disorders, the majority of which are myasthenic syndromes, and a moderate specificity (70%). The latter can be improved by the exclusion of neurogenic causes and the determination of the degree of jitter abnormality. Minor jitter abnormalities, under 115% of the upper limit of normal, are usually caused by myopathies with an associated neuromuscular transmission disorder, whereas levels higher than this value are usually associated with one of the myasthenic conditions. View Full-Text
Keywords: repetitive nerve stimulation; single fibre electromyography; Myasthenia; Paediatrics; neuromuscular junction repetitive nerve stimulation; single fibre electromyography; Myasthenia; Paediatrics; neuromuscular junction
►▼ Show Figures 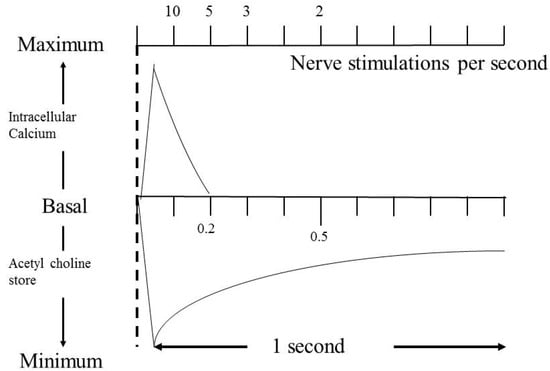