Gummy stem blight (GSB) causes enormous losses to melon (Cucumis melo L.) production worldwide. We aimed to develop useful molecular markers linked to GSB resistance. In this study, 168 F2 plants were obtained from the F1 population of a cross between the GSB-susceptible ‘Cornell ZPPM 339’ and the GSB-resistant ‘PI482399’ lines. A 3:1 ratio of susceptible and resistant genotypes was observed in the F2 population, indicating control by a single recessive gene. Nucleotide-binding site leucine-rich repeat (NBS-LRR) genes confer resistance against insects and diseases in cucurbits including melon. We cloned and sequenced the TIR-NBS-LRR-type resistance gene MELO3C022157, located on melon chromosome 9, from resistant and susceptible lines. Sequence analysis revealed deletions in the first intron, a 2-bp frameshift deletion from the second exon and a 7-bp insertion in the 4th exon of the resistant line. We developed two insertion/deletion (InDel) markers, GSB9-kh-1 and GSB9-kh-2, which were found in the first intron of MELO3C022157 linked to GSB resistance. We validated these markers with the F2 population and inbred lines. These InDels may be used to facilitate marker-assisted selection of GSB resistance in melon. However, functional analysis of overexpressing and/or knock-down mutants is needed to confirm the frameshift mutation. View Full-Text
Keywords: inheritance; GSB; NBS-LRR; InDel; phenotype; genotype inheritance; GSB; NBS-LRR; InDel; phenotype; genotype
►▼ Show Figures 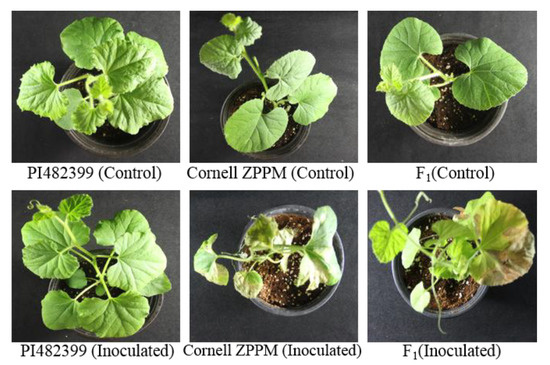