The nucleophilic attack of hydrogen sulfide (HS−) on six different chloroacetanilide herbicides was evaluated theoretically using the dispersion-corrected hybrid functional wB97XD and the 6-311++G(2d,2p) Pople basis sets. The six evaluated substrates were propachlor (A), alachlor (B), metolachlor (C), tioacetanilide (D), β-anilide (E), and methylene (F). Three possible mechanisms were considered: (a) bimolecular nucleophilic substitution (SN2) reaction mechanism, (b) oxygen assistance, and (c) nitrogen assistance. Mechanisms based on O- and N-assistance were discarded due to a very high activation barrier in comparison with the corresponding SN2 mechanism, with the exception of compound F. The N-assistance mechanism for compound F had a free activation energy of 23.52 kcal/mol, which was close to the value for the corresponding SN2 mechanism (23.94 kcal/mol), as these two mechanisms could occur in parallel reactions with almost 50% of each one. In compounds A to D, an important electron-withdrawing effect of the C=O and C=S groups was seen, and consequently, the activation free energies in these SN2 reactions were smaller, with a value of approximately 18 kcal/mol. Instead, compounds E and F, which have a CH2 group in the β-position, presented a higher activation free energy (≈22 kcal/mol). Good agreement was found between experimental and theoretical values for all cases, and a reaction force analysis was performed on the intrinsic reaction coordinate profile in order to gain more details about the reaction mechanism. Finally, from the natural bond orbital (NBO) analysis, it was possible to evaluate the electronic reorganization through the reaction pathway where all the transition states were early in nature in the reaction coordinate (δBav < 50%); the transition states corresponding to compounds A to D turned out to be more synchronous than those for compounds E and F. View Full-Text
Keywords: density functional theory; computational modeling; transition state; herbicides; reaction mechanism density functional theory; computational modeling; transition state; herbicides; reaction mechanism
►▼ Show Figures 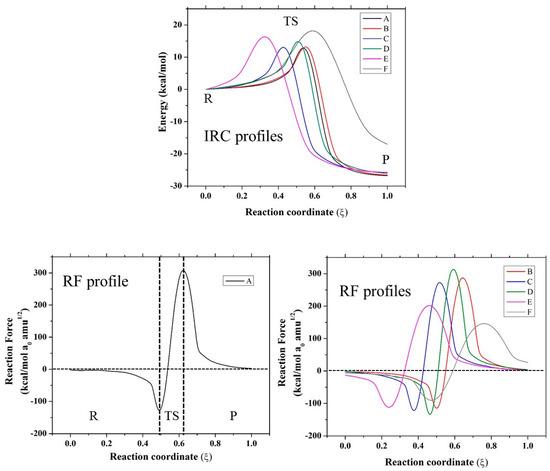