EpCAM Expression in Lymph Node Metastases of Urothelial Cell Carcinoma of the Bladder: A Pilot Study

Renal cell carcinoma (RCC) is the most frequent renal tumor and the majority of patients are diagnosed with advanced disease. Tumor angiogenesis plays a crucial role in the development and progression of RCC together with hypoxia and glucose metabolism. These three pathways are strictly connected to the cell growth and proliferation, like a loop that is self-feeding. Over the last few years, the ever-deeper knowledge of its contribution in metastatic RCC led to the discovery of numerous tyrosine kinase inhibitors (TKIs) targeting pro-angiogenic receptors at different levels such as sunitinib, sorafenib, pazopanib, axitinib, tivozanib, and dovitinib. As anti-angiogenic agents, TKIs interfere the loop, being able to inhibit tumor proliferation. TKIs are now available treatments for advanced RCC, which demonstrated to improve overall survival and/or progression free survival. Their effects can be detectable early on Positron Emission Tomography/Computed Tomography (PET/CT) by change in 18F-fluoro-2-deoxy-2-d-glucose (18F-FDG) uptake, the main radiotracer used to date, as a strong indicator of biological response. 18F-FDG PET/CT demonstrated an ability to predict and monitor disease progression, allowing an early and reliable identification of responders, and could be used for image-guided optimization and “personalization” of anti-angiogenic regimens. New radiotracers for biometabolic imaging are currently under investigation, which exploit the other pathways involved in the cancer process, including cellular proliferation, aerobic metabolism, cell membrane synthesis, hypoxia and amino acid transport, as well as the angiogenic process, but they require further studies. View Full-Text
Keywords: renal cell carcinoma; tumor angiogenesis; tyrosine kinase inhibitors; tyrosine kinase receptor; PET/CT; 18F-FDG; other radiotracers renal cell carcinoma; tumor angiogenesis; tyrosine kinase inhibitors; tyrosine kinase receptor; PET/CT; 18F-FDG; other radiotracers
►▼ Show Figures 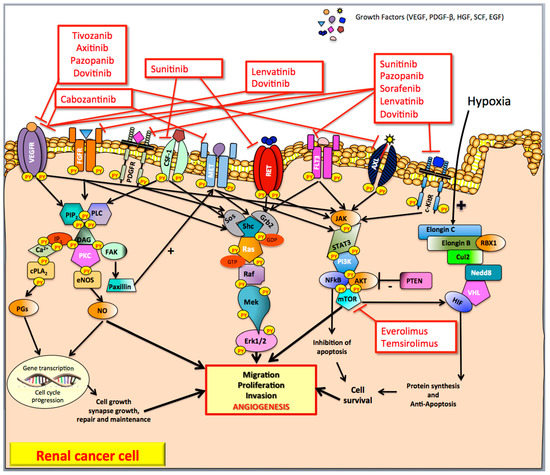