Aldosterone and Mineralocorticoid Receptors—Physiology and Pathophysiology
Previous Article in Journal

The adrenocorticotropin (ACTH) stimulation test (AST) has been reported to be useful for diagnosing primary aldosteronism (PA), particularly for differentiating PA subtypes under 1-mg dexamethasone suppression (DS). The aim of our study was to clarify the effect of 1-mg DS on AST results. A retrospective cohort study was conducted using data for 48 patients (PA: 30/48). We estimated the difference in plasma aldosterone concentration (PAC) responsiveness to ACTH stimulation with single (AST alone) and combined (AST under 1-mg DS) tests within the same patient. We compared the diagnostic accuracy of these two tests for PA and the laterality of hyperaldosteronism. We found no differences in PAC responsiveness to ACTH stimulation between single and combined tests, and observed a significant positive linear relationship (30 min, R2 = 0.75, p-value < 0.01). Both tests showed the highest diagnostic accuracy for PA following 30 min of ACTH stimulation. The ability to detect the laterality of hyperaldosteronism was inconsistent and differed according to the two definitions: lateralization ratio and the absolute aldosterone levels in adrenal venous sampling. PAC responsiveness to ACTH stimulation was similar for AST with and without 1-mg DS. AST can be performed under both conditions with similar accuracy to detect PA. View Full-Text
Keywords: primary aldosteronism; adrenocorticotropin (ACTH) stimulation test; dexamethasone suppression test primary aldosteronism; adrenocorticotropin (ACTH) stimulation test; dexamethasone suppression test
►▼ Show Figures 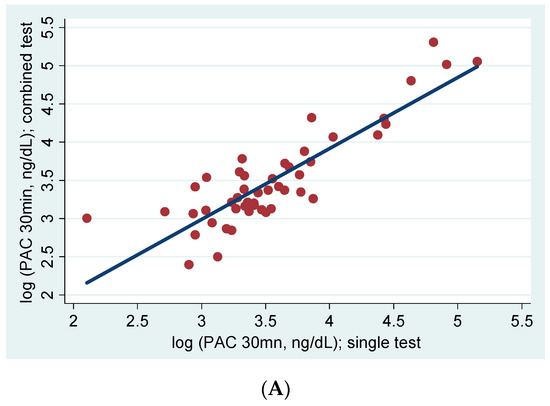