Chemical Diversity, Biological Activity, and Genetic Aspects of Three Ocotea Species from the Amazon
Next Article in Special Issue

Idiopathic Inflammatory Myopathies: A Review of the Classification and Impact of Pathogenesis
Previous Article in Special Issue

Bordetella holmesii can cause invasive infections but can also be isolated from the respiratory tract of patients with whooping-cough like symptoms. For the first time, we describe the lipid A structure of B. holmesii reference strain ATCC 51541 (alias NCTC12912 or CIP104394) and those of three French B. holmesii clinical isolates originating from blood (Bho1) or from respiratory samples (FR4020 and FR4101). They were investigated using chemical analyses, gas chromatography–mass spectrometry (GC–MS), and matrix-assisted laser desorption ionization–mass spectrometry (MALDI–MS). The analyses revealed a common bisphosphorylated β-(1→6)-linked d-glucosamine disaccharide with hydroxytetradecanoic acid in amide linkages. Similar to B. avium, B. hinzii and B. trematum lipids A, the hydroxytetradecanoic acid at the C-2′ position are carrying in secondary linkage a 2-hydroxytetradecanoic acid residue resulting of post-traductional biosynthesis modifications. The three clinical isolates displayed characteristic structural traits compared to the ATCC 51541 reference strain: the lipid A phosphate groups are more or less modified with glucosamine in the isolates and reference strain, but the presence of 10:0(3-OH) is only observed in the isolates. This trait was only described in B. pertussis and B. parapertussis strains, as well as in B. petrii isolates by the past. The genetic bases for most of the key structural elements of lipid A were analyzed and supported the structural data. View Full-Text
Keywords: Bordetellae; Bordetella holmesii; endotoxin; lipid A; structure; mass spectrometry; genomic Bordetellae; Bordetella holmesii; endotoxin; lipid A; structure; mass spectrometry; genomic
►▼ Show Figures 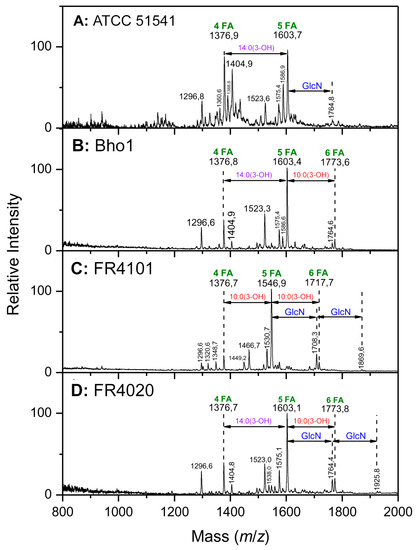