Atypical Antipsychotics in the Treatment of Acute Bipolar Depression with Mixed Features: A Systematic Review and Exploratory Meta-Analysis of Placebo-Controlled Clinical Trials

First- and second-generation antipsychotics (FGAs and SGAs, respectively), have the ability to inhibit cholesterol biosynthesis and also to interrupt the intracellular cholesterol trafficking, interfering with low-density lipoprotein (LDL)-derived cholesterol egress from late endosomes/lysosomes. In the present work, we examined the effects of FGA haloperidol on the functionality of late endosomes/lysosomes in vitro. In HepG2 hepatocarcinoma cells incubated in the presence of 1,1′-dioctadecyl-3,3,3,3′-tetramethylindocarbocyanineperchlorate (DiI)-LDL, treatment with haloperidol caused the enlargement of organelles positive for late endosome markers lysosome-associated membrane protein 2 (LAMP-2) and LBPA (lysobisphosphatidic acid), which also showed increased content of both free-cholesterol and DiI derived from LDL. This indicates the accumulation of LDL-lipids in the late endosomal/lysosomal compartment caused by haloperidol. In contrast, LDL traffic through early endosomes and the Golgi apparatus appeared to be unaffected by the antipsychotic as the distribution of both early endosome antigen 1 (EEA1) and coatomer subunit β (β-COP) were not perturbed. Notably, treatment with haloperidol significantly increased the lysosomal pH and decreased the activities of lysosomal protease and β-d-galactosidase in a dose-dependent manner. We conclude that the alkalinization of the lysosomes’ internal milieu induced by haloperidol affects lysosomal functionality. View Full-Text
Keywords: antipsychotic; haloperidol; cholesterol; intracellular lipid traffic; late endosome/lysosome; pH antipsychotic; haloperidol; cholesterol; intracellular lipid traffic; late endosome/lysosome; pH
►▼ Show Figures 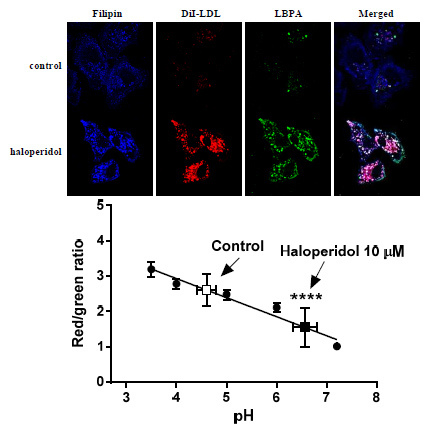