Diurnal Profiles of Melatonin Synthesis-Related Indoles, Catecholamines and Their Metabolites in the Duck Pineal Organ
Previous Article in Journal

:
In this study, the effects of melatonin (MT) on superovulation and reproductive hormones (melatonin, follicle-stimulating hormone (FSH), luteinizing hormone (LH) and PRL) were investigated in female sika deer. Different doses (40 or 80 mg/animal) of melatonin were subcutaneously implanted into deer before the breeding season. Exogenous melatonin administration significantly elevated the serum FSH levels at the time of insemination compared with levels in control animals. During superovulation, the serum LH levels in donor sika deer reached their highest values (7.1 ± 2.04 ng/mL) at the point of insemination, compared with the baseline levels (4.98 ± 0.07 ng/mL) in control animals. This high level of LH was sustained until the day of embryo recovery. In contrast, the serum levels of PRL in the 80 mg of melatonin-treated group were significantly lower than those of control deer. The average number of corpora lutea in melatonin-treated deer was significantly higher than that of the control (p < 0.05). The average number of embryos in the deer treated with 40 mg of melatonin was higher than that of the control; however, this increase did not reach significant difference (p > 0.05), which may be related to the relatively small sample size. In addition, embryonic development in melatonin-treated groups was delayed.
Keywords:
melatonin; superovulation; FSH; LH; PRL; sika deer

Superovulation technology has been widely applied in assisted reproductive technologies of livestock and economic animals. However, the superovulation efficiency of sika deer (Cervus nippon) is considerably lower than that of other species [1,2], which limits the progress of sika deer farming. In a previous study, we found that the administration of melatonin implants could improve the number of corpora luteum and recovered embryos in sheep [3]. Therefore, we expect that melatonin implantation may also promote superovulation in sika deer.
Melatonin is a derivative of the essential amino acid, tryptophan, and possesses multiple physiological functions. Melatonin application is widely used to improve reproductive performance in several species [4,5,6]. In short-day breeders, melatonin stimulates the release of gonadotropin-releasing hormone (GnRH) from the hypothalamus-pituitary-gonadal (HPG) axis, thereby regulating pituitary secretion of luteinizing hormone (LH) and follicle-stimulating hormone (FSH) to control estrus and ovulation [7,8].
There are few reports related to the reproductive physiology of sika deer, including the profiles of their reproductive hormone during the breeding season. Thus, the purpose of this study was to investigate our hypothesis that melatonin implants can alter the levels of reproductive hormones (FSH, LH and PRL), thereby promoting the superovulation effect., whereas this is the first observation of the effects of melatonin on superovulation and reproductive hormones of the rare species (sika deer), which has unique reproductive characteristic different from domestic animals. Although this study was partially based on the results of our previous report [1,6,9,10], we firstly report the LH and FSH increase after melatonin treatment in deer. This improved superovulation and the number of useful embryos.

2.1. The Concentration of MT, FSH, LH and PRL in Sika Deer after MT Implantation

The melatonin levels in two melatonin-treated groups were similar at the various stages of superovulation and dropped the first time after controlled intravaginal drug release (CIDR) removal; however, these levels remained significantly higher than those of the control animals (p < 0.05) (Figure 1). This indicated that the subcutaneously implanted melatonin was constantly released into the blood circulation. Interestingly, after CIDR removal, the decreased melatonin levels rose again during the period between the insemination and embryo recovery in both of the melatonin-treated groups; this phenomenon was not observed in control animals (Figure 1). In the control group, the melatonin levels did not change among various stages (Figure 1). 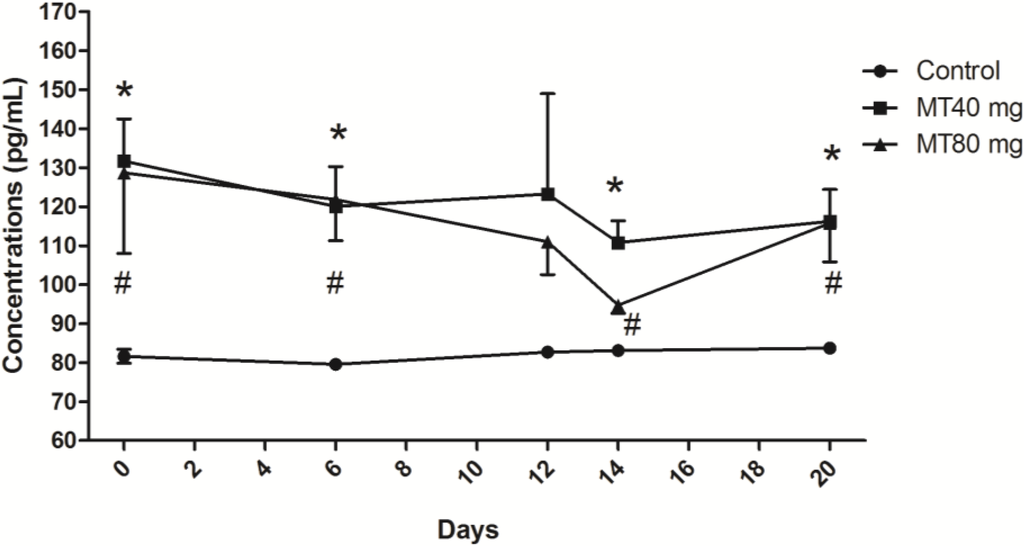 LH levels in the control group were stable during the process of superovulation. Significant fluctuations of LH occurred in melatonin-treated animals (p < 0.05). The highest LH values in melatonin-treated animals were observed on the insemination day (Day 14) of superovulation; the high levels of LH persisted until the day of embryo recovery (Figure 3).

The data indicated that after melatonin implantation, the PRL levels in all groups slowly decreased. After CIDR removal, the PRL levels rose again (Figure 4). The PRL levels in the high-dose (80 mg/animal) melatonin-treated animals were significantly elevated compared with those of the other animals during the entire process of superovulation (p < 0.05) (Figure 4).

2.2. Correlation between the Levels of Melatonin and FSH, LH and PRL

Several strong correlations were observed between the serum levels of melatonin and FSH, LH and PRL at various stages of superovulation. The data, which were derived from Figure 1, Figure 2, Figure 3 and Figure 4, are listed in Table 1.

2.3. Effects of Melatonin Implantation on Superovulation in Female Sika Deer

The results revealed that the numbers of corpora lutea in the melatonin-implanted animals were significantly higher than those of the control animals (p < 0.05) (Figure 5A). With respect to the number of embryos recovered, there was an increased tendency for embryo recovery in the 40-mg melatonin-implanted animals compared with the control group. However, this increase did not reach statistical significance (p > 0.05).
It appears that embryonic development in the melatonin-treated groups was delayed. In the control animals, all embryos developed into the blastocyst stage. However, nearly half of the embryos from the melatonin-treated animals remained in the morula stage, although this phenomenon failed to exhibit significant differences, due to the shortage of recovered embryos (p > 0.05) (Figure 5B). 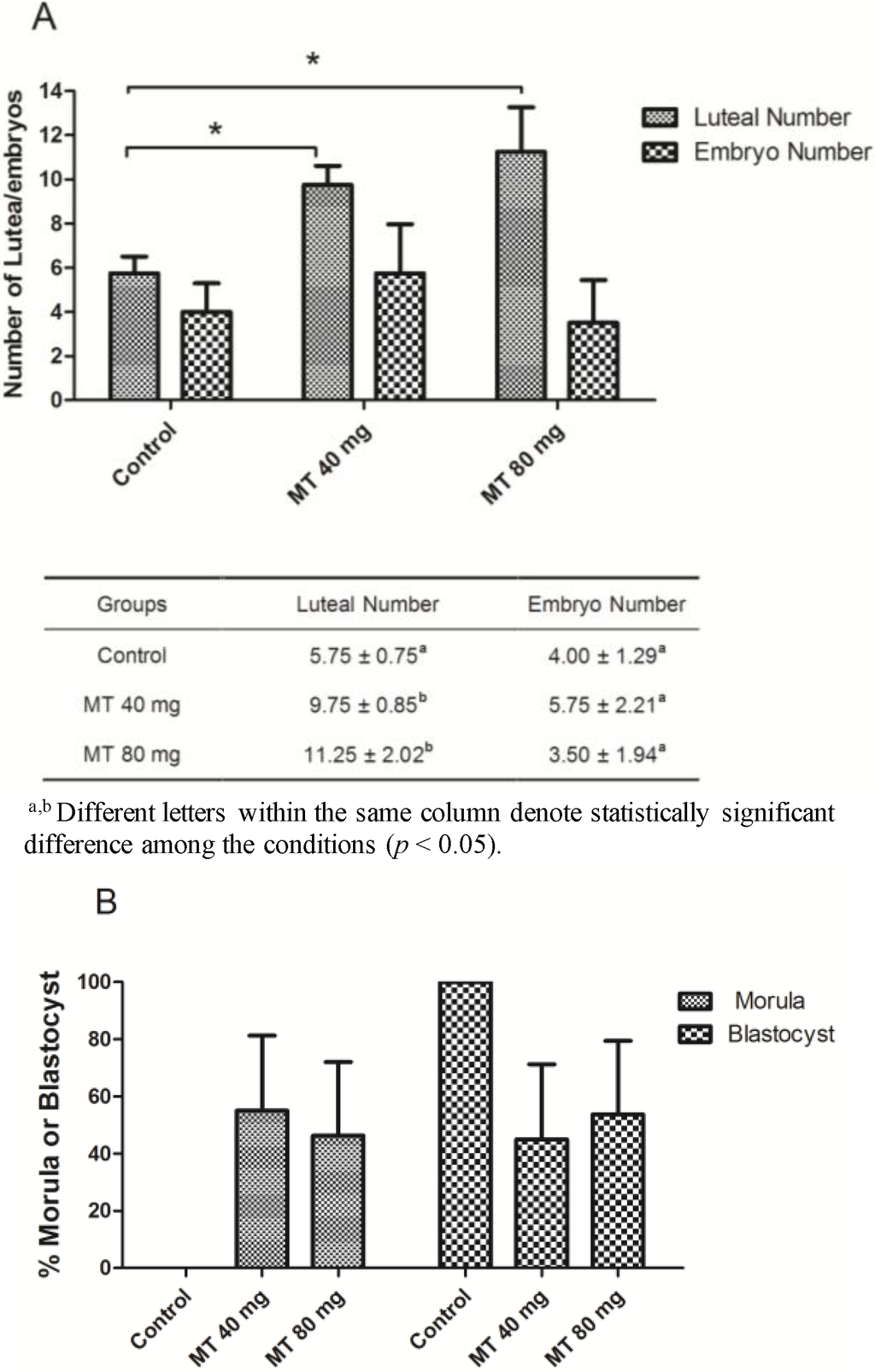 Twelve female sika deer donors were selected and bred at the Beijing Lushen Deer Industry Co., Ltd. (Beijing, China), deer breeding farm. All experimental protocols regarding the handling of sika deer were in accordance with the requirements of the Institutional Animal Care and Use Committee at China Agricultural University.

Estrous synchronization, superovulation, insemination (frozen semen from a single buck) and embryo recovery were performed as described previously [1]. Briefly, estrous synchronization treatment consisted of an ovine CIDR (InterAg, Hamilton, New Zealand). The date of CIDR insertion was designated Day 0 (initial day of treatment). Superovulation was conducted with a total dose of 320 mg of Folltropin-V (Bioniche, Belleville, ON, Canada). Intramuscular injections were given every 12 h (40 mg for each injection), beginning on the afternoon of Day 9. The CIDRs were removed on Day 12, concurrent with the seventh injection of FSH. Insemination was performed (transcervical technique) 2 days after CIDR removal, with insemination repeated 8 to 12 h later. Embryos were surgically collected 6 days after the first insemination.

Blood was collected on the right side of the carotid at the time of CIDR insertion, CIDR substitution, CIDR removal, insemination and embryo recovery during superovulation from 20 September to 10 October.

Blood was inverted for 2 to 4 h at room temperature, and the blood clots were stripped with sterile needles. The tubes were centrifuged at 3000× g, 4 °C for 10 min, and the sera were separated. The sera were carefully collected into 1.5-mL centrifuge tubes (one for testing and one spare) and stored at −20 °C until the assays were performed.

In this study, for the first time, we reported that exogenous melatonin implantation into female sika deer modified the profiles of their reproductive hormones and improved their superovulation, as demonstrated by an increase in the number of corpora lutea and embryos recovered. The current observations provide valuable information regarding the use of melatonin to increase reproductive efficiency in female sika deer.