The Influence of Metal Stress on the Availability and Redox State of Ascorbate, and Possible Interference with Its Cellular Functions
Previous Article in Journal

The putative thylakoid lumen immunophilin, FKBP16-3, has not yet been characterized, although this protein is known to be regulated by thioredoxin and possesses a well-conserved CxxxC motif in photosynthetic organisms. Here, we characterized rice OsFKBP16-3 and examined the role of this gene in the regulation of abiotic stress in plants. FKBP16-3s are well conserved in eukaryotic photosynthetic organisms, including the presence of a unique disulfide-forming CxxxC motif in their N-terminal regions. OsFKBP16-3 was mainly expressed in rice leaf tissues and was upregulated by various abiotic stresses, including salt, drought, high light, hydrogen peroxide, heat and methyl viologen. The chloroplast localization of OsFKBP16-3-GFP was confirmed through the transient expression of OsFKBP16-3 in Nicotiana benthamiana leaves. Transgenic Arabidopsis and transgenic rice plants that constitutively expressed OsFKBP16-3 exhibited increased tolerance to salinity, drought and oxidative stresses, but showed no change in growth or phenotype, compared with vector control plants, when grown under non-stressed conditions. This is the first report to demonstrate the potential role of FKBP16-3 in the environmental stress response, which may be regulated by a redox relay process in the thylakoid lumen, suggesting that artificial regulation of FKBP16-3 expression is a candidate for stress-tolerant crop breeding. View Full-Text
Keywords: FK506 binding protein; FKBP16-3; thylakoid lumen; environmental stress tolerance FK506 binding protein; FKBP16-3; thylakoid lumen; environmental stress tolerance
►▼ Show Figures 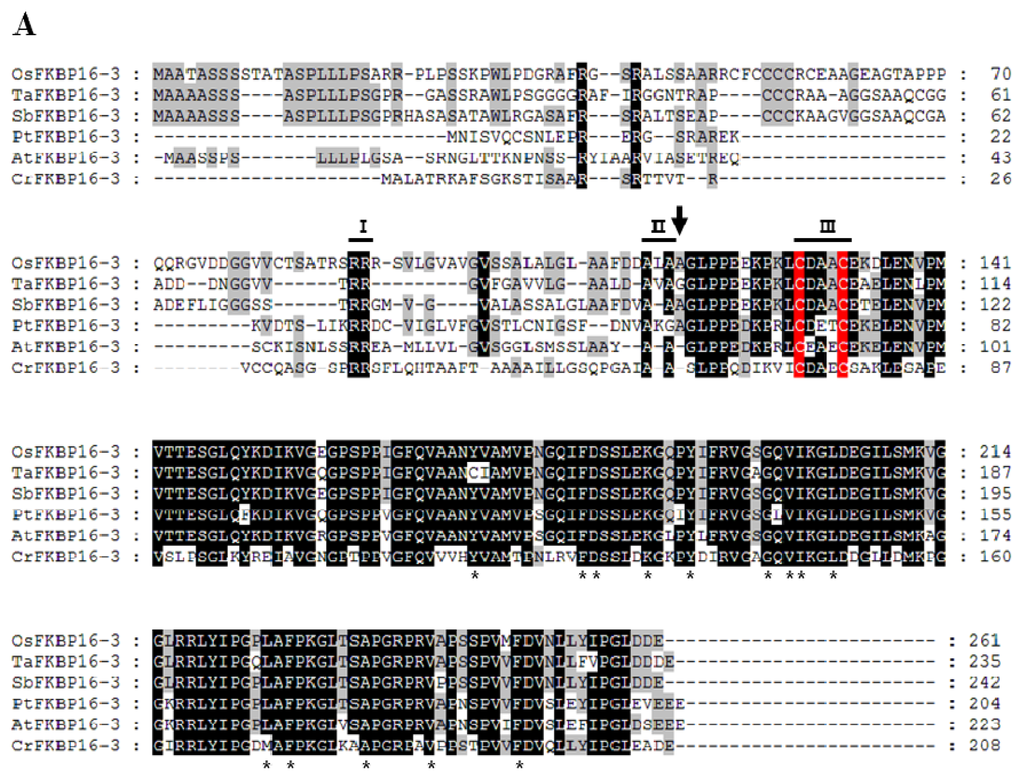