On our way to discovering and developing compounds that have an antioxidant impact compared to ascorbic acid and other biological activities, we designed, synthesized, and evaluated a new series of heterocyclic moieties drugs (1–11) as antioxidants and antimicrobial agents. As starting moieties, these new candidates were derived from two promising heterocyclic compounds, imidazoldin-4-one and thiazol-4-one. Firstly, diphenylimidazol 1 was obtained because of the cyclo condensation one-pot ternary reaction of urea, aniline, and chloroacetic acid under thermal conditions. Out of this starting compound, we could design and create new vital rings such as purine and triazine as in compounds 5 and 6, respectively. Secondly, the start thiazole derivative 7 was obtained from the intermolecular cyclization of thiourea, chloroacetic acid, p-nitobezaldehyde in the presence of sodium acetate. We synthesized various derivatives from this second starting compound 7 by being subjected to different reagents such as aniline, phenylenediamine, phenylhydrazine, and barbituric acid to yield 8, 9, 10, and 11, respectively. Using ascorbic acid as the standard compound, the pharmacological testing for antioxidant activity assessment of the produced derivatives was evaluated against ABTS (2,20-azinobis (3-ethylbenzothiazoline-6-sulfonic acid). Candidate 6 exhibited the best activity as an antioxidant agent compared to ascorbic acid as a reference compound. Moreover, all compounds were evaluated as antimicrobial agents against a series of bacteria and fungi. Among all synthesized compounds, compound 6 achieved high efficiency against two types of fungi and four kinds of bacteria, as Clotrimazole and Ampicillin were used as the reference agents, respectively. All chemical structures of the novel synthesized candidates were unequivocally elucidated and confirmed utilizing spectroscopical and elemental investigations. View Full-Text
Keywords: imidazolothiazole; imidazotriazine; azabene; antioxidant activity; ABTS assay; antimicrobial agents; molecular docking imidazolothiazole; imidazotriazine; azabene; antioxidant activity; ABTS assay; antimicrobial agents; molecular docking
►▼ Show Figures 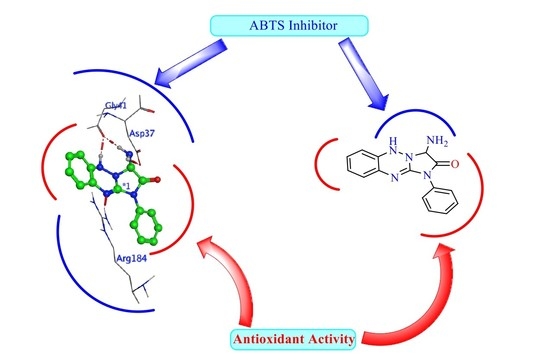