The development and maintenance of bone structure depends on mechanical stimulation. Numerous studies have demonstrated that mechanical loading promotes bone formation, whereas the absence of mechanical stimulation decreases bone mass [1]. During space flight, astronauts experience microgravity that leads to serious physiological changes, one of the most prominent being bone loss, which increases fracture risk [2]. Long-term exposure to microgravity is associated with increased bone resorption and decreased bone formation, with a reduction in bone mineral density (BMD) of approximately 2% after one month, equivalent to annual bone loss in postmenopausal women [3].
Drug intervention is not routinely used in space flight and exercise has been combined with nutrition improvement. However, because of the lack of mechanical load or duration of space flight, osteoblast stimulation is insufficient to maintain bone mass [4]. This has led to a focus on pharmaceutical interventions such as osteoporosis drugs, but their potential to prevent bone loss in space remains to be clarified. In particular, the effects of different drugs, alone or combined, and dose–response relationships for improvements in bone quality and regeneration have not been investigated. Currently available therapeutic agents that are conventionally used for the prevention of bone loss have several side effects [5]. Therefore, novel therapeutic approaches are being explored, which have fewer side effects, while effectively minimizing the loss of bone mass.
Collagen, which is a major component of all tissues can be produced from various sources. For example, they can be extracted from sea animals such as shark, marine sponges [6,7]. In addition, they can be extracted from terrestrial animals such as porcine, bovine animals. However, collagen is mostly produced from pork skin and bovine bones. Moreover, bovine collagen is currently widely used for many applications such as foods and cosmetics [6].
Collagen peptide (CP), known as collagen hydrolysates, is mainly composed of mixtures of peptides obtained by partial hydrolysis of gelatins [8]. Due to its higher digestive absorption and safety, oral supplementation with CP for the restoration of bone joints has gained increasing scientific attention [9]. Daily doses of 150 or 500 mg/kg of CP for up to three months significantly prevented bone loss in ovariectomized (OVX) rats compared with control rats [10]. CP also improved vertebral composition and biomechanical strength, and increased the quantity and volume ratio of lumbar trabecular bone, which demonstrated its effect on bone protection [8]. In postmenopausal women with osteopenia, administration of calcium–collagen chelate supplements was found to improve bone mineral density and increase the rate of bone formation and bone resorption [11].
A previous study in OVX rats demonstrated that daily doses of either CP alone (750 mg/kg) or CP–calcium citrate (CC; 750–75 mg/kg) had an osteoprotective effect by inhibiting the loss of bone mineral density. Moreover, CP–CC suppressed trabecular bone loss and improved the microarchitecture of the distal femur [12]. However, the effect of CP on prevention and restoration of bone loss induced by microgravity has not been reported. The main purpose of this study was to observe the effects of oral administration of CP, alone and in combination with CC, on bone structure and bone metabolism in rats under hind limb unloading simulated microgravity (SMG), and to provide a theoretical basis for the use of CP–CC to prevent and treat microgravity-related osteoporosis.

Bone turnover was evaluated by serum levels of biomarkers of resorption (CTX and TRAP-5b) and formation (ALP, osteocalcin, and PINP). After four weeks, serum levels of Ca, ALP, and osteocalcin in the SMG groups were lower than in the CN group (p < 0.05, Table 2), except for osteocalcin levels in the SMG CP–CC group. After oral administration of CP–CC, serum osteocalcin levels of SMG rats were significantly higher than those of the SMG CN and other SMG treatment groups. PINP levels in SMG CN and SMG CP rats were significantly higher than in CN rats, whereas treatment with CC inhibited the increase in PINP (p < 0.05).

Bovine bone CP (prepared by our laboratory) and CC (Dongtai Food Ingredients, Lianyungang, China) were used. Male, three-month-old Sprague-Dawley rats (n = 40, body weight: 300 ± 20 g) were obtained from the animal facility of the China Astronaut Research and Training Center (Beijing). Animals were maintained in cages under standard conditions (12-h light/dark cycle with free access to food and water). After feeding adaptation for seven days, the rats were divided into five groups (n = 8 each): a control group with normal gravity (CN), an untreated hind limb unloading simulated microgravity group (SMG CN), and three SMG groups that underwent once-daily treatment by gastric gavage with CC (75 mg/kg), CP (750 mg/kg), or CP–CC (750 and 75 mg/kg). Bovine CP and CC were dissolved in distilled water. The tail-suspended rats were fixed by the tail at a 30° head-down angle to mimic microgravity [39]. Briefly, the rats were individually caged, suspended by the tail using a strip of adhesive surgical tape attached to a chain hanging from a pulley, and subjected to hind limb unloading by tail suspension for 28 days. After sacrifice, serum was collected, and the bilateral femurs and tibiae were dissected and processed for dual-energy X-ray absorptiometry, three-point bending mechanical tests, microcomputed tomography, and evaluation of serum bone metabolic markers. All experimental procedures were approved by the Committees of Animal Ethics and Experimental Safety of the China Astronaut Research and Training Center.

The secondary spongiosa extracted from the left distal femurs of rats was scanned with a desktop, microcomputed tomography scanner (μCT40; Scanco Medical, Bruttisellen, Switzerland) using a voxel size of 10 μm, an X-ray tube voltage of 70 kVp, a current intensity of 114 μA, and an integration time of 600 ms. Briefly, slices were scanned at the region of the distal femur beginning at 0.1 mm from the most proximal aspect of the growth plate and extending proximally along the femur diaphysis. A volume of interest was manually drawn on each specimen. Microstructural measures included trabecular bone mineral density, bone volume per total volume (BV/TV), trabecular thickness (Tb.Th), trabecular number (Tb.N), and trabecular separation (Tb.Sp). Computation of these structural measures was performed using a previously described method [12].

Bovine CP, alone or in combination with CC, did not inhibit bone loss in a tail-suspended rat model of microgravity. However, CP or CP–CC treatment partially ameliorated the microgravity-induced deterioration of bone microarchitecture. This may represent an adjunct dietary strategy to reduce the risk of fracture in astronauts and highly sedentary populations.

Conceptualization, J.L. and Y.G.; investigation, J.W.; and writing—original draft preparation, J.L. All authors have read and agreed to the published version of the manuscript. 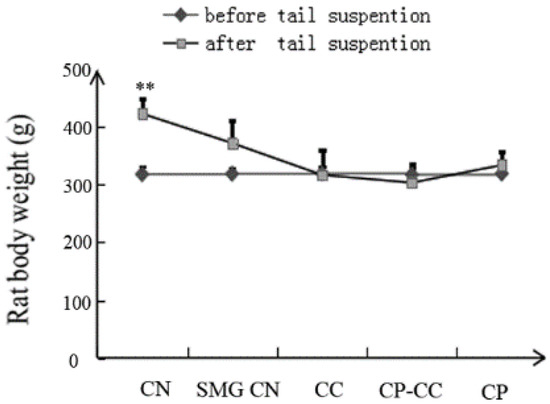 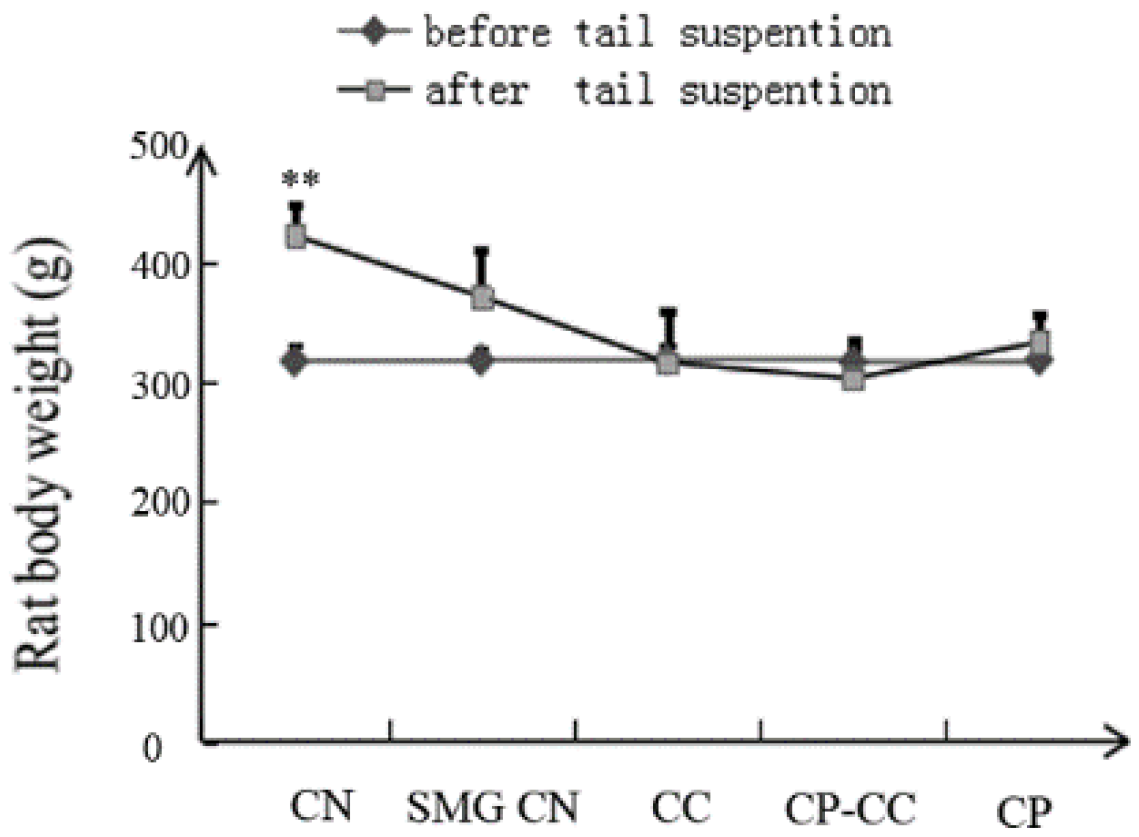 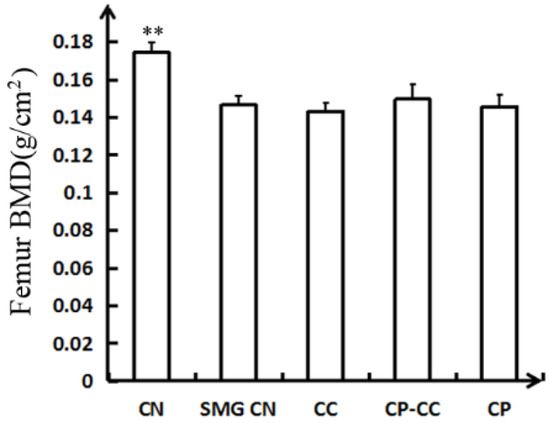 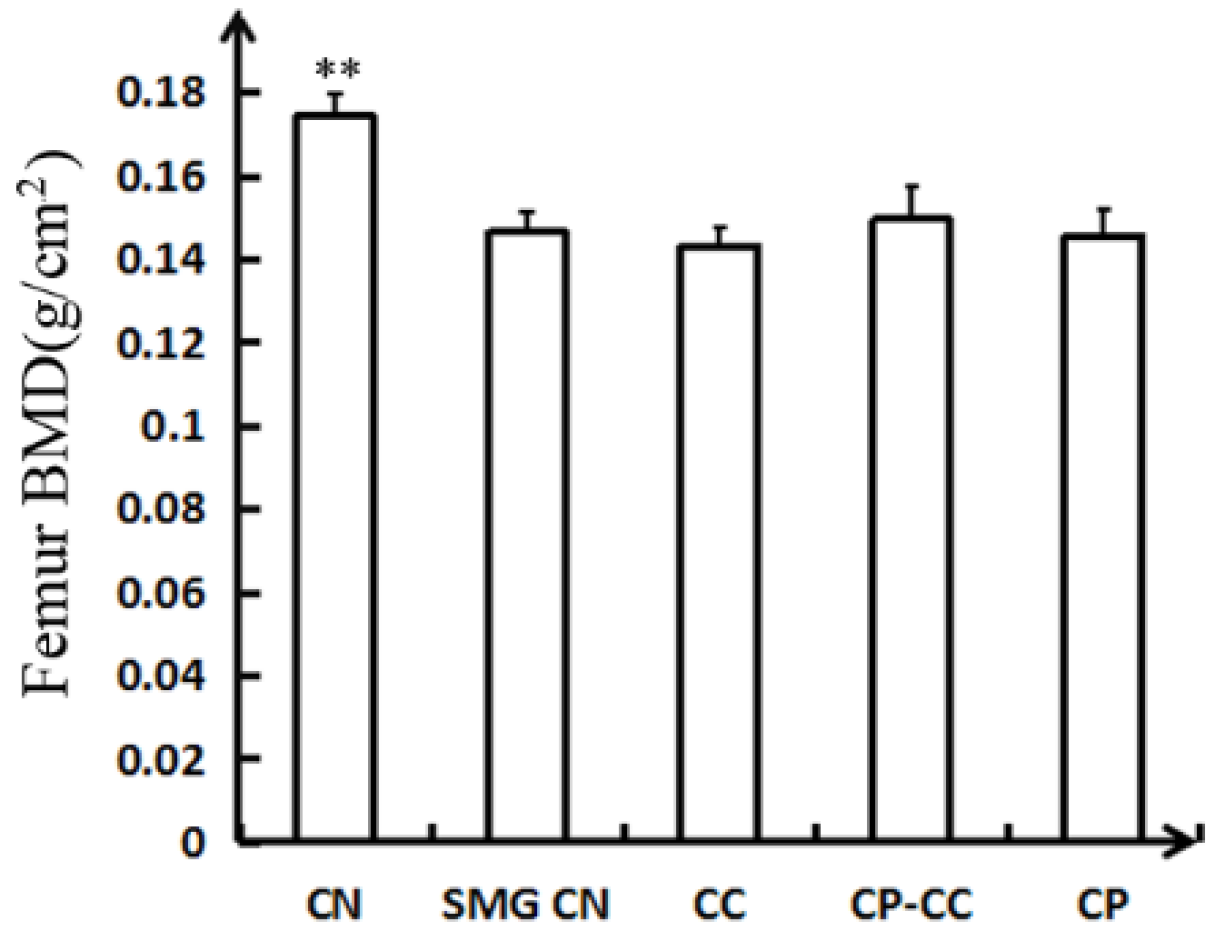