The essential oil (EO) of plants of the Myrtaceae family has diverse chemical composition and several applications. However, data on the oil yield, its composition, and its complete chemistry are still unavailable for some species belonging to this family, such as Myrcia eximia DC. In this study, the chemical compositions of the EOs of Myrcia eximia were evaluated by using gas chromatography (GC) alone and gas chromatography coupled with mass spectrometry (GC–MS). Samples for both evaluations were collected from the city of Magalhães Barata, State of Pará, Brazil, in 2017 and 2018. For the plant material collected in 2017, EO was obtained by hydrodistillation (HD) only, while, for the material collected in 2018, EO was obtained by hydrodistillation and steam distillation (SD), in order to evaluate the differences in chemical composition and mass yield of the EO. The yields of (E)-caryophyllene were 15.71% and 20.0% for the samples collected by HD in 2017 and 2018, respectively, while the yield was 15.0% for the sample collected by SD in 2018. Hexanal was found to be the major constituent in the EO obtained by HD, with yield of up to 26.09%. The oil yields reached 0.08% by using SD, and 0.01% and 0.36% for the samples collected in 2017 and 2018, respectively, using HD. The results of this study provide new information about the mass yield and chemical composition of Myrcia eximia DC, and they can add value and income to traditional populations, as well as facilitate the preservation of this species. View Full-Text
Keywords: Myrcia eximia DC; essential oil; gas chromatography; (E)-caryophyllene Myrcia eximia DC; essential oil; gas chromatography; (E)-caryophyllene
►▼ Show Figures 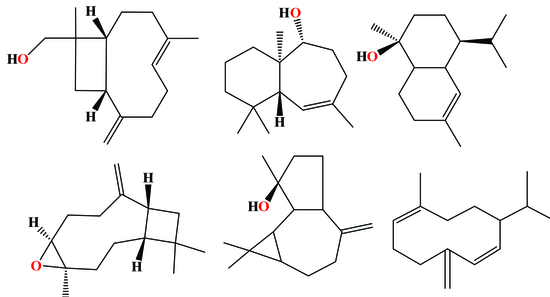