Amelioration of Hyperglycemia-Induced Nephropathy by 3,3′-Diindolylmethane in Diabetic Mice
Previous Article in Journal

Are the Hydantoin-1,3,5-triazine 5-HT6R Ligands a Hope to a Find New Procognitive and Anti-Obesity Drug? Considerations Based on Primary In Vivo Assays and ADME-Tox Profile In Vitro

Though the 5-HT6 serotonin receptor is an important target giving both agonists and antagonists similar therapeutic potency in the treatment of topic CNS-diseases, no 5-HT6R ligand has reached the pharmaceutical market yet due to the too narrow chemical space of the known 5-HT6R agents and insufficient “drugability.” Recently, a new group of non-indole and non-sulfone hydantoin-triazine 5-HT6R ligands was found, where 3-((4-amino-6-(4-methylpiperazin-1-yl)-1,3,5-triazin-2-yl)methyl)-5-methyl-5-(naphthalen-2-yl)imidazolidine-2,4-dione (KMP-10) was the most active member. This study is focused on wider pharmacological and “druglikeness” characteristics for KMP-10. A computer-aided insight into molecular interactions with 5-HT6R has been performed. “Druglikeness” was examined using an eight-test panel in vitro, i.e., a parallel artificial membrane permeability assay (PAMPA), and Caco-2 permeability-, P-glycoprotein (Pgp) affinity-, plasma protein binding-, metabolic stability- and drug–drug interaction-assays, as well as mutagenicity- and HepG2-hepatotoxicity risk tests. Behavioral studies in vivo, i.e., elevated plus-maze (EPM) and novel object recognition (NOR) tests, were performed. Extended studies on the influence of KMP-10 on rats’ metabolism, including biochemical tests, were conducted in vivo. Results indicated significant anxiolytic and precognitive properties, as well as some anti-obesity properties in vivo, and it was found to satisfy the “druglikeness” profile in vitro for KMP-10. The compound seems to be a good lead-structure and candidate for wider pharmacological studies in search for new CNS-drugs acting via 5-HT6R. View Full-Text
Keywords: 5-HT6R antagonist; 1,3,5-triazine; hydantoin; ADME-Tox parameters; procognitive effect; obesity 5-HT6R antagonist; 1,3,5-triazine; hydantoin; ADME-Tox parameters; procognitive effect; obesity
►▼ Show Figures 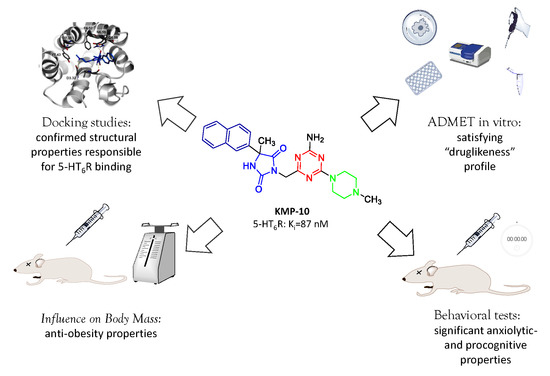