Quinones and nitrogen heterocyclic moieties have been recognized as important pharmacophores in the development of antitumor agents. This study aimed to establish whether there was any correlation between the in silico predicted parameters and the in vitro antiproliferative activity of a family of benzoindazolequinones (BIZQs), and to evaluate overexpressed proteins in human cancer cells as potential biomolecular targets of these compounds. For this purpose, this study was carried out using KATO-III and MCF-7 cell lines as in vitro models. Docking results showed that these BIZQs present better binding energies (ΔGbin) values for cyclooxygenase-2 (COX-2) than for other cancer-related proteins. The predicted ∆Gbin values of these BIZQs, classified in three series, positively correlated with IC50 measured in both cell lines (KATO-III: 0.72, 0.41, and 0.90; MCF-7: 0.79, 0.55, and 0.87 for Series I, II, and III, respectively). The results also indicated that compounds 2a, 2c, 6g, and 6k are the most prominent BIZQs, because they showed better IC50 and ∆Gbin values than the other derivatives. In silico drug absorption, distribution, metabolism, and excretion (ADME) properties of the three series were also analyzed and showed that several BIZQs could be selected as potential candidates for cancer pre-clinical assays. View Full-Text
Keywords: 1H-benzo[f]indazole-4,9-diones; benzoindazolequinones; antiproliferative activity; COX-2 inhibitors; docking 1H-benzo[f]indazole-4,9-diones; benzoindazolequinones; antiproliferative activity; COX-2 inhibitors; docking
►▼ Show Figures 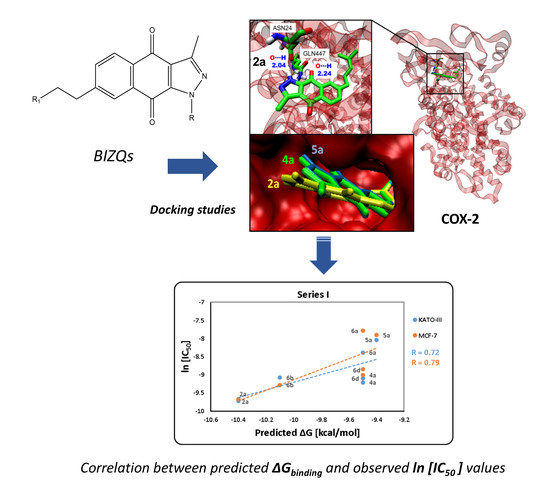