Resveratrol and Depression in Animal Models: A Systematic Review of the Biological Mechanisms

Porphyromonas endodontalis (P. endodontalis) lipopolysaccharide (LPS) is associated with the progression of bone resorption in periodontal and periapical diseases. Matrix metalloproteinase-2 (MMP-2) expression and activity are elevated in apical periodontitis and have been suggested to participate in bone resorption. Therefore, inhibiting MMP-2 activation may be considered a therapeutic strategy for treating apical periodontitis. Resveratrol is a natural non-flavonoid polyphenol that has been reported to have antioxidant, anti-cancer, and anti-inflammatory properties. However, the capacity of resveratrol to protect osteoblast cells from P. endodontalis LPS insults and the mechanism of its inhibitory effects on MMP-2 activation is poorly understood. Here, we demonstrate that cell viability is unchanged when 10 mg L−1 P. endodontalis LPS is used, and MMP-2 expression is drastically induced by P. endodontalis LPS in a concentration- and time-dependent manner. Twenty micromolar resveratrol did not reduce MC3T3-E1 cell viability. Resveratrol increased AMP-activated protein kinase (AMPK) phosphorylation, and Compound C, a specific AMPK inhibitor, partially abolished the resveratrol-mediated phosphorylation of AMPK. In addition, AMPK inhibition blocked the effects of resveratrol on MMP-2 expression and activity in LPS-induced MC3T3-E1 cells. Treatment with resveratrol also induced suppressor of cytokine signaling 1 (SOCS1) expression in MC3T3-E1 cells. SOCS1 siRNA negated the inhibitory effects of resveratrol on LPS-induced MMP-2 production. Additionally, resveratrol-induced SOCS1 upregulation was reduced by treatment with compound C. These results demonstrate that AMPK and SOCS1 activation are important signaling events during resveratrol-mediated inhibition of MMP-2 production in response to LPS in MC3T3-E1 cells, and there is crosstalk between AMPK and SOCS1 signaling. View Full-Text
Keywords: cell signaling; resveratrol; lipopolysaccharide; apical periodontitis cell signaling; resveratrol; lipopolysaccharide; apical periodontitis
►▼ Show Figures 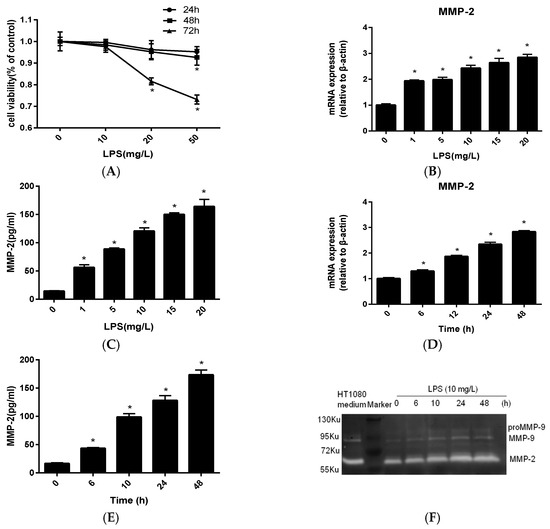