Monomyristin and Monopalmitin Derivatives: Synthesis and Evaluation as Potential Antibacterial and Antifungal Agents
Next Article in Special Issue

Alzheimer’s disease (AD) is considered to one of 10 key diseases leading to death in humans. AD is considered the main cause of brain degeneration, and will lead to dementia. It is beneficial for affected patients to be diagnosed with the disease at an early stage so that efforts to manage the patient can begin as soon as possible. Most existing protocols diagnose AD by way of magnetic resonance imaging (MRI). However, because the size of the images produced is large, existing techniques that employ MRI technology are expensive and time-consuming to perform. With this in mind, in the current study, AD is predicted instead by the use of a support vector machine (SVM) method based on gene-coding protein sequence information. In our proposed method, the frequency of two consecutive amino acids is used to describe the sequence information. The accuracy of the proposed method for identifying AD is 85.7%, which is demonstrated by the obtained experimental results. The experimental results also show that the sequence information of gene-coding proteins can be used to predict AD. View Full-Text
Keywords: Alzheimer’s disease; gene coding protein; sequence information; support vector machine; classification Alzheimer’s disease; gene coding protein; sequence information; support vector machine; classification
►▼ Show Figures 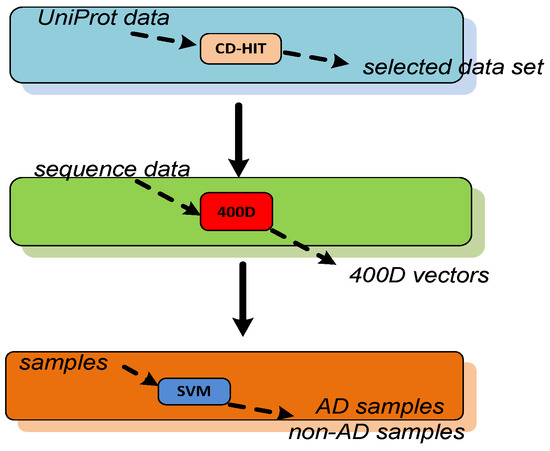