Biochemical, Physiological and Transcriptomic Comparison between Burley and Flue-Cured Tobacco Seedlings in Relation to Carbohydrates and Nitrate Content
Next Article in Special Issue

Total phenolic content (TPC), reducing power (RP), superoxide radical scavenging (RS), and thiobarbituric acid reactive substances (TBARS) production inhibition were measured in raw and denatured aqueous extracts from sprouts and wheatgrass of einkorn and emmer obtained at increasing salinity. Grains were incubated and kept at 0, 25, 50, and 100 mM NaCl until either sprout or wheatgrass stage. Additionally, a recovery treatment was included, in which sprouts obtained at 100 mM NaCl were then transferred at 0 mM NaCl until wheatgrass stage. All parameters (TPC, RP, RS, and TBARS production inhibition) increased with sprouting and were highest in wheatgrass. Salinity increased all parameters, but the effect varied with NaCl concentration, genotype, developmental stage, and plant material processing (raw or denatured). Overall, given the delay and limitation of growth at high NaCl concentration, the best compromise appears to be the application of a moderate salinity (25 to 50 mM NaCl). In denatured extracts, TPC, RP, and RS slightly decreased, and TBARS was not affected, which means that antioxidant activity was mainly related to compounds other than enzymes and peptides, and thus it can be assumed to remain after digestion. Thus, supplementing the human diet with einkorn or emmer sprouts and wheatgrass can actually benefit health. View Full-Text
Keywords: sprouting; salinity; reducing power; radical scavenging; TBARS sprouting; salinity; reducing power; radical scavenging; TBARS
►▼ Show Figures 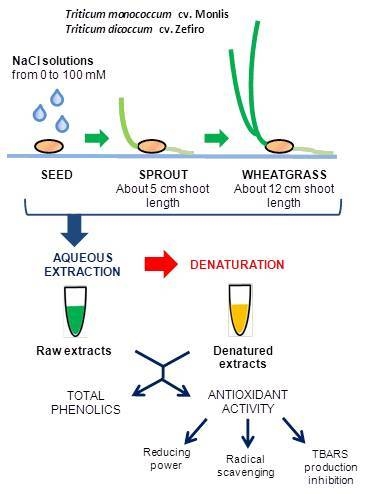