Residue Dynamics and Risk Assessment of Prochloraz and Its Metabolite 2,4,6-Trichlorophenol in Apple
Next Article in Special Issue

Screening of bioactive components is important for modernization and quality control of herbal medicines, while the traditional bioassay-guided phytochemical approach is time-consuming and laborious. The presented study proposes a strategy for rapid screening of active components from herbal medicines. As a case study, the quantitative pattern–activity relationship (QPAR) between compounds and the osteoclastic inhibitory effect of Herba epimedii, a widely used herbal medicine in China, were investigated based on joint models. For model construction, standard mixtures data showed that the joint-action models are better than the partial least-squares (PLS) model. Then, the Good2bad value, which could reflect components’ importance based on Monte Carlo sampling, was coupled with the joint-action models for screening of active components. A compound (baohuoside I) and a component composed of compounds with retention times in the 6.9–7.9 min range were selected by our method. Their inhibition rates were higher than icariin, the key bioactive compound in Herba epimedii, which could inhibit osteoclast differentiation and bone resorption in a previous study. Meanwhile, the half-maximal effective concentration, namely, EC50 value of the selected component was 7.54 μg/mL, much smaller than that of baohuoside I—77 μg/mL—which indicated that there is synergistic action between compounds in the selected component. The results clearly show our proposed method is simple and effective in screening the most-bioactive components and compounds, as well as drug-lead components, from herbal medicines. View Full-Text
Keywords: bioactive-component screening; Herba epimedii; herbal medicine; quantitative pattern–activity relationship bioactive-component screening; Herba epimedii; herbal medicine; quantitative pattern–activity relationship
►▼ Show Figures 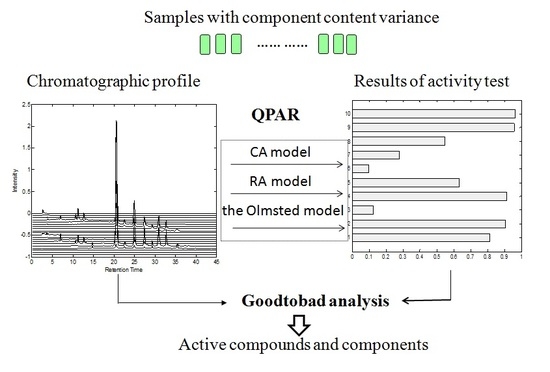