Activin A (ActA), a member of transforming growth factor-beta (TGF-b) super- family, affects many cellular processes, including ischemic stroke. Though the neuroprotective effects of exogenous ActA on oxygen-glucose deprivation (OGD) injury have already been reported by us, the endogenous role of ActA remains poorly understood. To further define the role and mechanism of endogenous ActA and its signaling in response to acute ischemic damage, we used an OGD model in PC12 cells to simulate ischemic injury on neurons in vitro. Cells were pre-treated by monoclonal antibody against activin receptor type IIA (ActRII-Ab). We found that ActRII-Ab augments ischemic injury in PC12 cells. Further, the extracellular secretion of ActA as well as phosphorylation of smad3 in PC12 cells was also up-regulated by OGD, but suppressed by ActRII-Ab. Taken together, our results show that ActRII-Ab may augment ischemic injury via blocking of transmembrane signal transduction of ActA, which confirmed the existence of endogenous neuroprotective effects derived from the ActA/Smads pathway. ActRIIA plays an important role in transferring neuronal protective signals inside. It is highly possible that ActA transmembrance signaling is a part of the positive feed-back loop for extracellular ActA secretion. View Full-Text
Keywords: ischemic injury; OGD; activin A; ActA/Smads pathway ischemic injury; OGD; activin A; ActA/Smads pathway
►▼ Show Figures 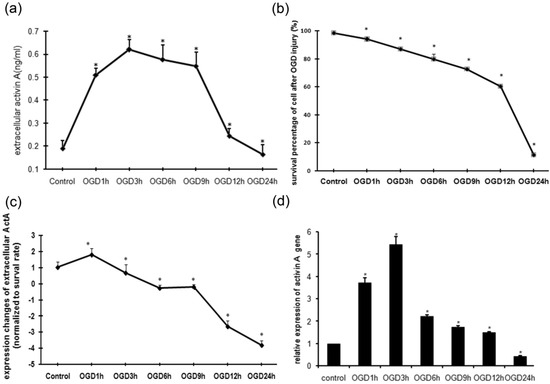