Permutation Entropy and Statistical Complexity in Mild Cognitive Impairment and Alzheimer’s Disease: An Analysis Based on Frequency Bands
Previous Article in Journal

Linear heart rate variability (HRV) indices are dependent on the mean heart rate, which has been demonstrated in different models (from sinoatrial cells to humans). The association between nonlinear HRV indices, including those provided by recurrence plot quantitative analysis (RQA), and the mean heart rate (or the mean cardiac period, also called meanNN) has been scarcely studied. For this purpose, we analyzed RQA indices of five minute-long HRV time series obtained in the supine position and during active standing from 30 healthy subjects and 29 end-stage renal disease (ESRD) patients (before and after hemodialysis). In the supine position, ESRD patients showed shorter meanNN (i.e., faster heart rate) and decreased variability compared to healthy subjects. The healthy subjects responded to active standing by shortening the meanNN and decreasing HRV indices to reach similar values of ESRD patients. Bivariate correlations between all RQA indices and meanNN were significant in healthy subjects and ESRD after hemodialysis and for most RQA indices in ESRD patients before hemodialysis. Multiple linear regression analyses showed that RQA indices were also dependent on the position and the ESRD condition. Then, future studies should consider the association among RQA indices, meanNN, and these other factors for a correct interpretation of HRV. View Full-Text
Keywords: heart rate variability; hemodialysis; recurrence plot analysis; active standing heart rate variability; hemodialysis; recurrence plot analysis; active standing
►▼ Show Figures 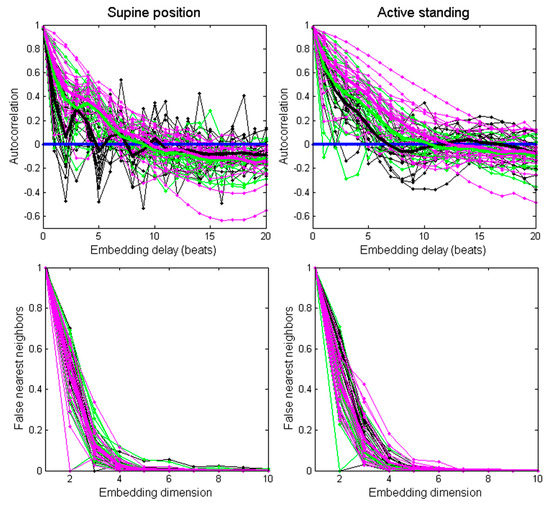