Exact Renormalization Groups As a Form of Entropic Dynamics

Iterated games are an important framework of economic theory and application, at least since the original work of Axelrod’s computational tournaments of the early 80’s. Recent theoretical results have shown that games (the economic context) and game theory (the decision-making process) are both formally equivalent to computational logic gates. Here these results are extended to behavioural data obtained from an experiment in which rhesus monkeys sequentially played thousands of the “matching pennies” game, an empirical example similar to Axelrod’s tournaments in which algorithms played against one another. The results show that the monkeys exhibit a rich variety of behaviours, both between and within subjects when playing opponents of varying complexity. Despite earlier suggestions, there is no clear evidence that the win-stay, lose-switch strategy is used, however there is evidence of non-linear strategy-based interactions between the predictors of future choices. It is also shown that there is consistent evidence across protocols and across individuals that the monkeys extract non-markovian information, i.e., information from more than just the most recent state of the game. This work shows that the use of information theory in game theory can test important hypotheses that would otherwise be more difficult to extract using traditional statistical methods. View Full-Text
Keywords: behavioural economics; game theory; synergy; transfer entropy; matching pennies; cognitive strategies behavioural economics; game theory; synergy; transfer entropy; matching pennies; cognitive strategies
►▼ Show Figures 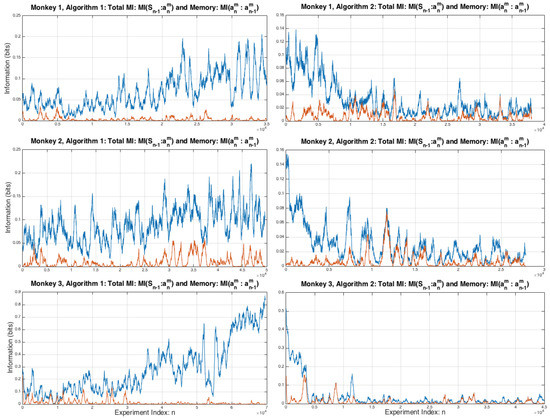