Energy and exergy analyses were carried out for a pilot parabolic solar dish-Stirling System. The system was set up at a site at Kerman City, located in a sunny desert area of Iran. Variations in energy and exergy efficiency were considered during the daytime hours of the average day of each month in a year. A maximum collector energy efficiency and total energy efficiency of 54% and 12.2%, respectively, were predicted in July, while during the period between November and February the efficiency values were extremely low. The maximum collector exergy efficiency was 41.5% in July, while the maximum total exergy efficiency reached 13.2%. The values of energy losses as a percentage of the total losses of the main parts of the system were also reported. Results showed that the major energy and exergy losses occurred in the receiver. The second biggest portion of energy losses occurred in the Stirling engine, while the portion of exergy loss in the concentrator was higher compared to the Stirling engine. Finally, the performance of the Kerman pilot was compared to that of the EuroDish project. View Full-Text
Keywords: solar energy; solar-thermal technology; solar parabolic dish-Stirling; exergy analysis; efficiency solar energy; solar-thermal technology; solar parabolic dish-Stirling; exergy analysis; efficiency
►▼ Show Figures 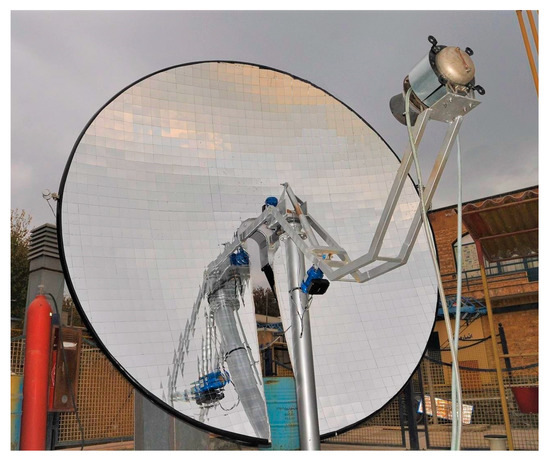