The editorial team of Toxins would like to congratulate the winner of the Best Poster Award, Daniel Henkel, at the 5th German Pharm-Tox Summit. 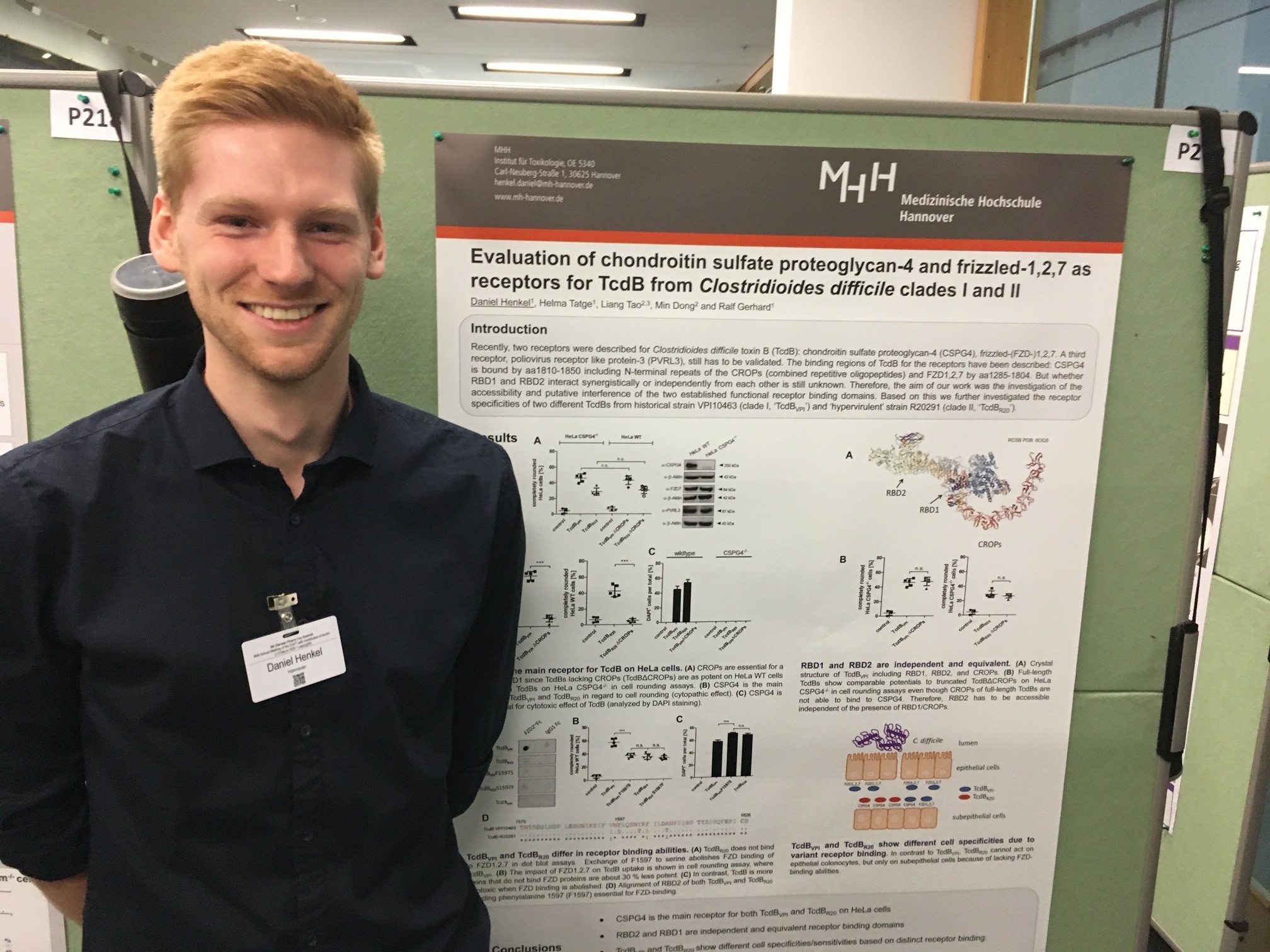 Here are the title and abstract of his work:

Evaluation of Chondroitin Sulfate Proteoglycan-4 and Frizzled-1,2,7 for Cytopathic and Cytotoxic Effects of TcdB from Historic and Hypervirulent Clostridioides difficile Strains

Clostridioides difficile is a gram-positive and spore-forming bacterium that is the main cause of nosocomial, antibiotic-induced diarrhea. The clinical symptoms are caused by two exotoxins that are released by C. difficile (TcdA and TcdB). Both toxins are 300 kDa sized glucosyltransferases that inactivate small intracellular Rho-GTPases by mono-glucosylation. This leads to the destruction of the organisation of the actin cytoskeleton and to the rounding of the cells. This drastic morphological change is a valid and safe method to detect the activity of the toxins.

In order to enter the cells, the toxins first bind to their receptors on the cell surfaces, whereupon they are taken up into the cells by receptor-mediated endocytosis. So far, three receptors have been identified for the main virulence factor TcdB: chondroitin sulfate proteoglycan-4 (CSPG4/NG2), poliovirus receptor like 3 (PVRL3/nectin-3) and the Wnt receptor proteins Frizzled1,2,7 (FZD1,2,7). While the binding regions for CSPG4 and FZD1,2,7 have been identified, the functional binding to PVRL3 and a resulting toxin uptake has not yet been validated. Our investigations, however, show that the contribution of PVRL3 to toxin uptake is negligible.

The CSPG4 and FZD receptor binding domains of TcdB have only been investigated independently from each other, although they are located in close spatial proximity. In our work we have therefore investigated a possible dependence of both receptor binding domains and determined the respective proportion of the receptors on the effect of TcdB. For this purpose, we prepared recombinant TcdB from both the historical strain VPI10463 of Clade I (TcdBVPI) and the hypervirulent strain R20291 of Clade II (TcdBR20). In addition, we have used variants that can no longer bind either to CSPG4 (TcdBΔCROPs), or to FZD1,2,7 (TcdBVPIF1597S) or to either of the two receptors (TcdBVPIΔCROPs F1597S). In addition, we have used HeLa wild-type and HeLa CSPG4-/- cells complementarily in cell rounding assays and cytotoxicity tests. We could show that CSPG4 is the major receptor for both TcdBVPI and TcdBVPI in terms of cytopathic activity, accounting for estimated 70 % and 90 % effect, respectively. Furthermore, CSPG4 mediates almost exclusively the cytotoxic effect in HeLa cells.

In the historical TcdBVPI a phenylalanine (F1597) is essential for binding to FZD1,2,7, which is replaced by a serine in TcdBR20. Consequently, TcdB from the hypervirulent strain does not bind to FZD1,2,7. Against this background, we have prepared the mutant TcdBVPIF1597S, which showed a reduced cytopathic potency identical to that of TcdBR20.

By using toxins that specifically address one of two receptors, and by using HeLa cells, which lack CSPG4 as a receptor, in a complementary approach we evaluated additive function of CSPG4 and FZD1,2,7 for historical TcdBVPI. Both receptor binding sites can independently mediate toxin uptake. Thus, in case of TcdB the two-receptor model means an extension of the target cell spectrum – rather than increased cell specificity. The increased cell specificity is only achieved by the loss of functional FZD binding, as is the case with TcdBR20 from the hypervirulent strain. Our results now allow to attribute the stronger inflammatory effect of the hypervirulent C. difficile strains to the focused effect of TcdBR20 on CSPG4-positive cells, such as immune cells or cells of the enteric nervous system.