Congratulations to the Winner of the Toxins Travel Student Award at Venom Week VII, Gainesville, Florid, USA, 2020 (Sponsored by Toxins)

The editorial team of Toxins would like to congratulate the winner of the Toxins Travel Student Award, Roberto Ponce Lopez, at Venom Week VII. 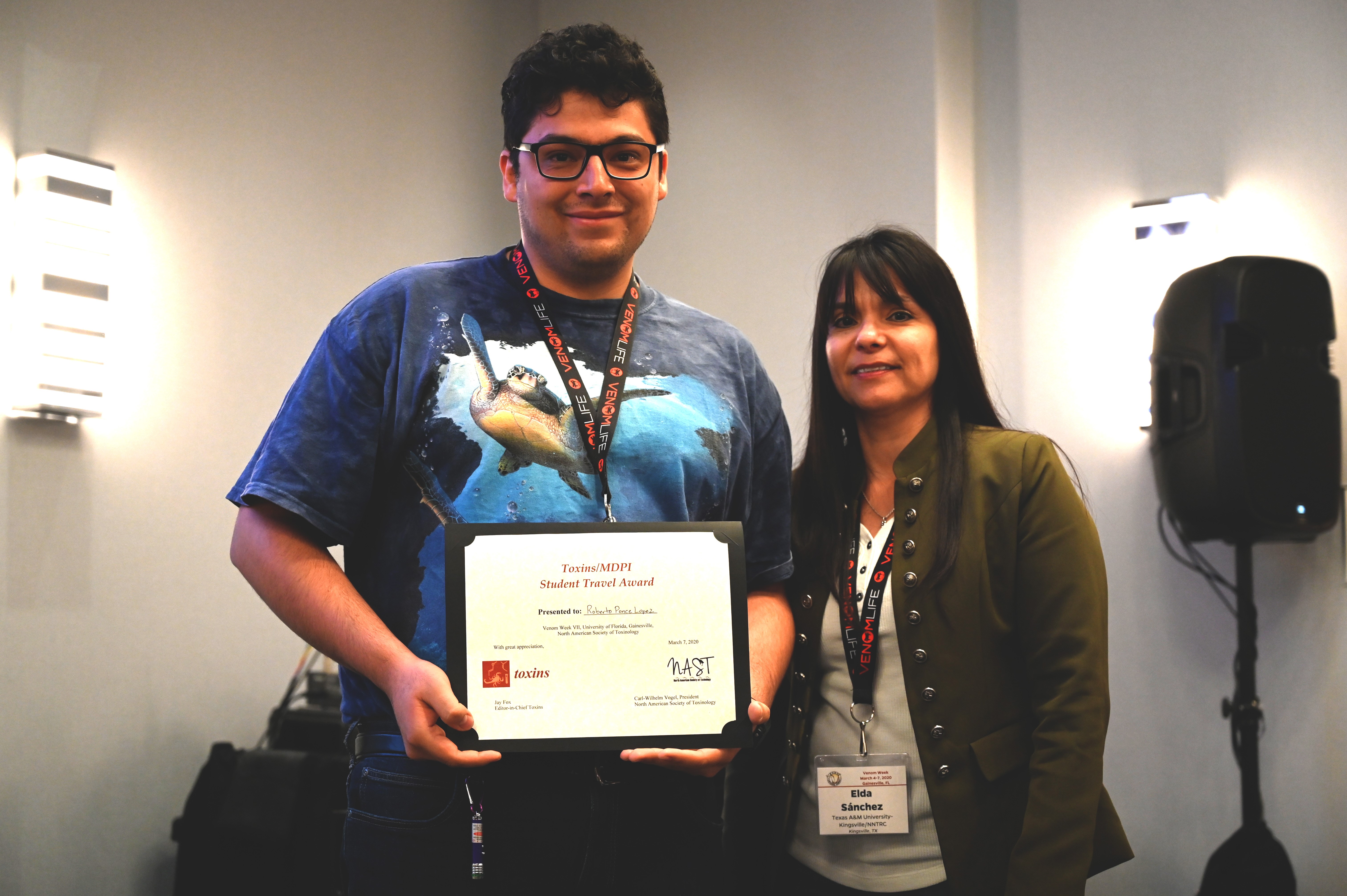 Here are the title and abstract of his work:

Background: Crotoxin (molecular weight (MW): ~24 kDa) and crotamine (MW: ~5 kDa) are two of the most studied neurotoxic components found in several rattlesnake venoms (Crotalus spp.). The former compound is well neutralized by antivenoms, whereas the latter is well known for its spastic paralysis symptom provoked in mice with no evidence of neutralization. Recently, it was reported that crotamine is the major toxin found in some neonate and juvenile Mexican rattlesnake venoms such as Crotalus molossus nigrescens (~50%). Currently, the available Mexican pit viper antivenoms neither recognize nor neutralize crotamine from C. m. nigrescens, possibly explained by its low immunogenicity due to its low molecular weight. Sphingomyelinase D (SMD) is a highly immunogenic enzyme (MW: ~30 kDa) found in Loxosceles spp. spider venom. To increase immunogenicity of a low molecular weight toxin, we hypothesized that our novel recombinant fusion protein, composed of crotamine from C. m. nigrescens and sphingomyelinase D from L. reclusa used as carrier, will contribute significantly to the generation of neutralizing antibodies against crotamine, preventing its spastic paralysis and lethality.

Methods: Crotamine cDNA was synthetized from the venom gland mRNA of a C. m. nigrescens individual from Mexico, and one plasmid containing L. reclusa SMD was available in the laboratory. By standard genetic engineering procedures, we cloned in tandem sphingomyelinase D and one crotamine isoform into the expression vector pQE30. This fusion protein was expressed in Origami Escherichia coli. Using the recombinant protein, we performed immunization protocols in rabbits and, during the scheme, we measured ELISA antibody titers to purified crotamine from C. m. nigrescens venom.

Discussion/Conclusion: The SMD–crotamine fusion protein used as immunogen generates antibodies that recognize crotamine. We are using pre-incubation experiments to analyze the neutralization ability of antibodies to prevent spastic paralysis and lethality from crotamine in mice.