Congratulations to the Winners of the Best Poster Award and the Best Oral Communication Award at the 26th Meeting of the French Society of Toxinology (SFET), Paris, France, 2019 (Sponsored by Toxins)

The editorial team of Toxins would like to congratulate the winner of the Best Poster Award, Ludivine LOPEZ, and the Best Oral Communication Award, Geoffrey MASUYER, at the 26th Meeting of the French Society of Toxinology (SFET). 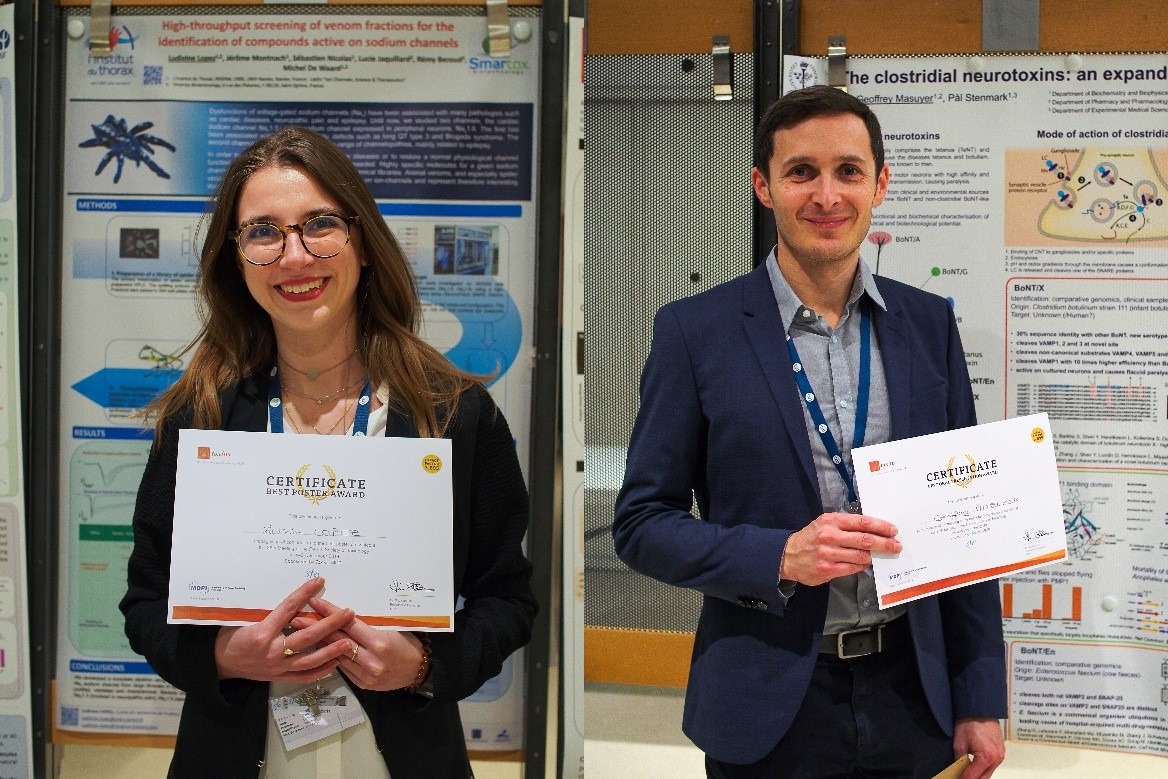 Here are the titles and abstracts of their work:

Title: High-Throughput Screening of Venom for Identification of Active Compound in Ion Channels

Dysfunctions of voltage-gated sodium channels (Nav) have been associated with many pathological conditions such as cardiac diseases, neuropathic pain, and epilepsy. In order to study the role of these channels in diseases or to restore function, specific molecules targeting ion channels are needed. Highly specific molecules for a given isoform of sodium channel are hard to discover with the usual chemical libraries. Animal venoms, and especially spider venoms, contains about tens of peptides acting on ion channels and therefore represent interesting libraries for drug discovery. By screening spider venoms on Nav, we aimed to identify new toxins targeting specifically one channel isoform with the use of an automated patch-clamp (APC) technique (SyncroPatch364, Nanion). For this purpose, all venoms were preliminary fractionated in libraries of 64 fractions and tested on several stable Nav cell lines. APC allows two venoms to be tested at the same time and accelerate the drug discovery process. Fractions of interest are those that reduce sodium peak current (by at least 30%), slow down inactivation, or increase late sodium current. False-positive fractions were excluded based on detection of material in HPLC or mass spectrometry. Until now, two different Nav lines have been tested: Nav1.5 and Nav1.6. Primary screening allows identification of 28 fractions active in at least one isoform. Among them, 24 are specific for one channel (10 for Nav1.5, 14 for Nav1.6). The majority of positive fractions induce a slowdown in inactivation (5 for Nav1.5, 12 for Nav1.6). The selected fractions were re-fractionated with a complementary purification technique until the isolated peptides were obtained. These molecules were tested again for bioactivity and underwent full de novo sequencing, chemical synthesis, and full pharmacological characterization. This study suggests that among the large number of toxins in venoms, a great variety target sodium channels with specificity for each sodium channel isoform, and illustrates how ACP is essential for screening.

1    Department of Pharmacy and Pharmacology, University of Bath, United Kindom.

Clostridial neurotoxins are potent toxins that target the nervous system of vertebrates causing paralytic diseases such as tetanus and botulism. Here, we present a new member of this family of toxins, PMP1, a clostridial-like neurotoxin that selectively targets Anopheles mosquitoes, thus expending the range of host species targeted by this family. PMP11 was isolated from Paraclostridium bifermentans strains collected in geographically varied anopheline endemic areas. PMP1 was showed to use a common mechanism of toxicity that disrupts SNARE-mediated exocytosis by cleavage of syntaxin. Our results suggest PMP1 employs a different receptor recognition strategy, illustrated by the high-resolution structure of the PMP1 binding domain. The discovery of PMP1 has a significant impact on our understanding of the clostridial neurotoxin evolution. Importantly, it provides an exciting opportunity for the development of innovative biotechnological tools that can reduce malaria through anopheline control.