The year 2020 marks the 25th anniversary of Molecules, a peer-reviewed open access journal of chemistry. Molecules has published more than 20,000 papers from more than 65,000 authors. More than 34,000 reviewers have submitted at least one review report. We value the contributions made by authors and reviewers. To celebrate this 25th anniversary, we are arranging a series of special content and events. We hope you can join us to celebrate this milestone of our journal and enjoy the collection below.

View the 25-year timeline infographic here. Trace the development of Molecules from its origins with remarkable events.

Molecules was launched by Dr. Lin in collaboration with Springer Verlag as one of the first electronic journals on chemistry.

MDPI took over the publishing of Molecules from Springer Verlag and started to publish it as an open access journal.

Dr. Esteban Pombo-Villar took over as Editor-in-Chief of Molecules. Dr. Derek McPhee started working part-time as an Editorial Assistant to the Editor-in-Chief.

Dr. Shu-Kun Lin took over as Editor-in-Chief of Molecules. 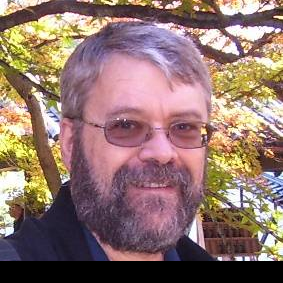 The Open Access logo is added and copyright is under the Creative Commons (CC) license v. 3.0.

The Section Metabolites was established

Molecules started to be published semi-monthly online in January 2019 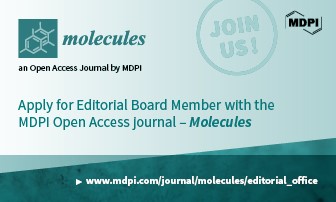 To celebrate the 25th anniversary of Molecules, we will expand our Editorial Board to gather experts in the area of chemistry. If you are interested in serving on the Editorial Board, please send your full academic CV and a short cover letter that details your interest and enthusiasm for the position to [email protected] 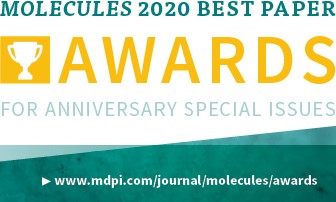 To celebrate the 25th anniversary of our journal Molecules, we launched a series of Anniversary Special Issues. For more details, please click here.