The guided tours to obtain the data for this study took place at the Opel Zoo in Kronberg (Germany). These were public tours offered daily (Monday to Friday) at 11 am during the survey period (July to October 2021). Participation in the tours was free of charge, but due to hygiene measures in effect at the time of the study, a non-binding online pre-registration was required. The maximum number of participants was 15 people per tour and only one tour was offered daily. The duration of the tour was approximately one hour and the topics for each tour were published on the Opel Zoo website in advance. Tours were conducted by one of four full-time zoo educators. Tours on similar topics covered the same content, animals and used the same paths in the zoo. For this purpose, the zoo educators used a consistent dialogue. However, minor deviations between zoo educators cannot be completely avoided.
Three different types of tours were conducted for the study. The African mammals tour focused on African mammals, which include, in particular, Rothschild’s giraffes (Giraffa camelopardalis rothschildi) and African elephants (Loxodonta africana). In particular, the characteristics of the animals, their habitats, but also their endangerment and threats were addressed. In addition, the housing conditions of these animals in the zoo were discussed. The special topics tours were themed on specific topics (e.g., focus on animals in the European forest; especially the threat to the animals and their habitats but also actions by zoos such as breeding programs and reintroduction into their original habitat) or even individual species (e.g., African penguins (Spheniscus demersus); in particular, their habitat and its endangerment by, for example, guano extraction was addressed, but their hunting and breeding behavior were also included). The feeding tours included any one of the other tours (variable topics) followed by a feeding of animals. Either porcupines (Hystrix indica) or crested capuchins (Sapajus apella) were fed. During the animal feeding, the feeding behavior of the species was explained. The different types of tours were offered on different days, and as such the visitors were only able to attend one particular tour.
At the beginning of the guided tour, all tour participants were briefly informed about the research project and asked to fill out the short questionnaire. The participants were told that participation was voluntary, and people who did not want to fill out a questionnaire were also allowed to take part in the tour. In addition to the questionnaire, each participant was given a printed zoo pen to keep at the end of the tour. After the tour, the second questionnaire was distributed. Only persons of legal age were surveyed.

Since the study participants were surveyed spontaneously during a voluntary guided tour, in our experience the questionnaire had to be as short as possible, since people are more willing to participate in short surveys. Therefore, short measurement instruments from other studies were selected to measure nature connectedness and attitudes towards species conservation. The questionnaire can be found in Appendix A, Figure A1.

2.2.1. Measurement of Connection to Nature

Various instruments have been developed over the years to measure connection to nature. For example, the Connectedness to Nature Scale by Mayer and Frantz [46], the Environmental Identity Scale by Clayton [45], or the Nature Relatedness Scale by Nisbet et al. [55]. In this study, the Illustrated Inclusion of Nature in Self Scale (IINS) by Kleespies et al. [66] was used to measure connection to nature. The IINS is an adapted version of the Inclusion of Nature in Self Scale (INS) by Schultz [48]. The original INS consists of seven pairs of circles. One circle is labeled “me”; the other is labeled “nature”. The pairs of circles differ in their degree of overlap, from two separate circles (no connection to nature) to two completely overlapping circles (one with nature). For the evaluation, the pairs of circles were assigned hierarchical numbers from 1 (non-overlapping circles) to 7 (completely overlapping circles). Study participants are asked to select the pair of circles that best describes their own relationship with nature. The IINS is a form of the INS extended by graphic elements with the aim to increase the comprehensibility of the scale. The scale was originally developed and tested for children, but its validity and applicability have also been demonstrated for adults [66].

To assess attitudes toward species conservation, a short scale from Kleespies et al. [14] was used. The scale consists of four items covering the three components of the attitude construct. In addition, the scale has a direct zoo reference, which makes it particularly suitable for this study (Table 1). Participants were asked to rate their agreement with each item on a five-point Likert scale. For the analysis, the mean value was calculated for each person from the four items. Reliability and applicability of the scale have already been confirmed for a similar demographic group [14].

All calculations were performed with IBM SPSS 28. To determine the difference between test point 1 (before the guided tour) and test point 2 (after the guided tour), the Wilcoxon signed ranks test was used after the Kolmogorov-Smirnov test did not show a normal distribution (p < 0.001). The formula from Fritz et al. [67] was used to calculate the effect size.
For the analysis, individuals were divided into three groups according to their initial nature connectedness: IINS scores of 1 to 3 were classified as low nature connectedness, IINS scores of 4 as medium nature connectedness, and IINS scores of 5 and 7 as high nature connectedness [13]. Such a classification was not possible for attitudes toward species conservation, since the Likert scale was only a five-point scale and most study participants already showed very high scores at the beginning. To compare the baseline levels of connection to nature and attitudes toward species conservation between the guided tour types, the Kruskal-Wallis test was used.

Although the study was conducted with great care, there are some limitations that should be considered when interpreting the results. Since the study only surveyed people who participated in voluntary zoo tours, a very select group of people was chosen. It can be assumed that this group was, on average, more motivated to learn about environmental issues and to engage with nature. Therefore, the results are not directly transferable to the general population. Another point is that the tours were conducted by different zoo educators. Even though the general themes and routes were set by the zoo, there may still be small variations and differences between educators, which may have affected the tours.
The sample size is also a potential weakness of the study. With 269 persons, the sample was not particularly large. Therefore, only between 30 and 146 participants took part in the different tour types. The lack of a control group (zoo visit without a guided tour) is also a potential weakness of the study.

The results of this study show that even a simple and short environmental education program can have a positive effect on the participants’ connection to nature and environmental attitudes. The positive effect especially among those with an initial high connection to nature and very strong positive environmental attitudes shows that even in this group an increase is possible. The findings show that such short environmental education programs are an opportunity to increase nature connectedness and attitudes of people with low baseline values but also have a positive effect on people with already initially high values. It should be noted, however, that the observed effects, although highly significant, are small in terms of effect size. This study provides important evidence that learning at educationally prepared locations, such as zoos in our example, can play an important role in increasing environmental psychological variables, such as nature connectedness and environmental attitudes in people who choose voluntarily to participate in such a program. The impact of such programs on a more diversified audience needs to be investigated in further studies.

This study was partly supported by the Opel-Zoo foundation professorship in zoo biology from the “von Opel Hessische Zoostiftung” and by the Verband der Zoologischen Gärten (VdZ).

The study was conducted according to the guidelines of the Declaration of Helsinki and the local rules and regulations. No formal institutional review process was undertaken but ethical considerations were reviewed by the authors and zoo authorities. Since no personal data were collected, only persons of legal age were surveyed, the data were processed anonymously, and the persons were informed that participation in the study was voluntary, the project was deemed of low ethical risk.

The raw data supporting the conclusions of this article will be made available by the authors to any qualified researcher.

We would like to thank all the people who participated in our survey. Special thanks go to the guides at Opel-Zoo in Kronberg, without their help the data collection would not have been possible: Tanja Spengler, Katja Follert-Hagendorff, Alexandra Schneider and Martin Becker. 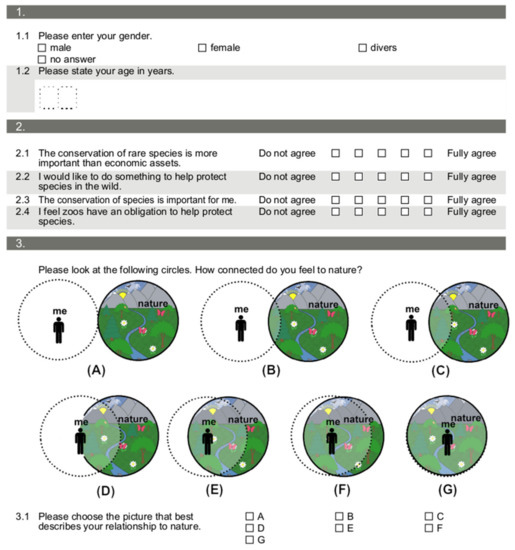