Submit to IJTPP Review for IJTPP 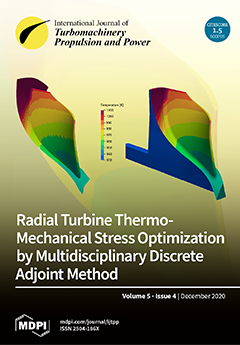 Cover Story (view full-size image): This paper addresses the problem of the design optimization of turbomachinery components under thermo-mechanical constraints, with focus on a radial turbine impeller for turbocharger applications. Typically, turbine components operate at high temperatures and are exposed to important thermal gradients, leading to thermal stresses. Dealing with such structural requirements necessitates the optimization algorithms to operate a coupling between fluid and structural solvers that is computationally intensive. To reduce the cost during the optimization, a novel multiphysics gradient-based approach is developed in this work, integrating a Conjugate Heat Transfer procedure by means of a partitioned coupling technique. View this paper
Previous Issue
Volume 5, September
Next Issue
Volume 6, March
We use cookies on our website to ensure you get the best experience. Read more about our cookies here.
Accept
We have just recently launched a new version of our website. Help us to further improve by taking part in this short 5 minute survey here. here.
Never show this again