There has been considerable progress in the implementation of newborn screening (NBS) programs for cystic fibrosis (CF), with DNA analysis being part of an increasing number of strategies. Thanks to advances in genomic sequencing technologies, CFTR-extended genetic analysis (EGA) by sequencing its coding regions has become affordable and has already been included as part of a limited number of core NBS programs, to the benefit of admixed populations. Based on results analysis of existing programs, the values and challenges of EGA are reviewed in the perspective of its implementation on a larger scale. Sensitivity would be increased at best by using EGA as a second tier, but this could be at the expense of positive predictive value, which improves, however, if EGA is applied after testing a variant panel. The increased detection of babies with an inconclusive diagnosis has proved to be a major drawback in programs using EGA. The lack of knowledge on pathogenicity and penetrance associated with numerous variants hinders the introduction of EGA as a second tier, but EGA with filtering for all known CF variants with full penetrance could be a solution. The issue of incomplete knowledge is a real challenge in terms of the implemention of NBS extended to many genetic diseases. View Full-Text
Keywords: cystic fibrosis; newborn screening; DNA analysis; next generation sequencing; extended genetic analysis cystic fibrosis; newborn screening; DNA analysis; next generation sequencing; extended genetic analysis
►▼ Show Figures 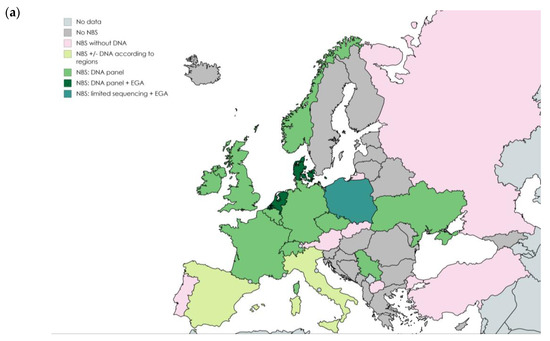