Since Aromatic hydrocarbons are recalcitrant and toxic, strategies to remove them are needed. The aim of this work was to isolate fungi capable of using aromatic hydrocarbons as carbon sources. Two isolates from an oil polluted site in Mexico were identified through morphological and molecular markers as a novel Rhodotorula sp. and an Exophiala sp. Both strains were able to grow in a wide range of pH media, from 4 to 12, showing their optimal growth at alkaline pH’s and are both halotolerant. The Exophiala strain switched from hyphae to yeast morphotype in high salinity conditions. To the best of our knowledge, this is the first report of salt triggering dimorphism. The Rhodotorula strain, which is likely a new undescribed species, was capable of removing singled ringed aromatic compounds such as benzene, xylene, and toluene, but could not remove benzo[a] pyrene nor phenanthrene. Nevertheless, these hydrocarbons did not impair its growth. The Exophiala strain showed a different removal capacity. It could remove the polyaromatic hydrocarbons but performed poorly at removing toluene and xylene. Nevertheless, it still could grow well in the presence of the aromatic compounds. These strains could have a potential for aromatic compounds removal. View Full-Text
Keywords: Exophiala sp.; Rhodotorula sp.; dimorphism; aromatic hydrocarbons; phenanthrene; benzo[a]pyrene; BTXs Exophiala sp.; Rhodotorula sp.; dimorphism; aromatic hydrocarbons; phenanthrene; benzo[a]pyrene; BTXs
►▼ Show Figures 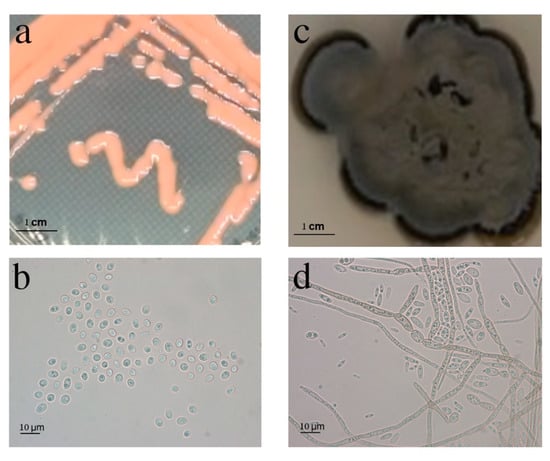