Corn grits are commonly used adjuncts in the brewing industry in the United States, especially for lager beers. The major challenge of using a high amount of adjuncts in the brewing process is reduced levels of nutrients available to yeast during fermentation, which negatively affects the growth and functioning of yeast, and results in sluggish fermentation. The problem is usually addressed by adding external nutrition. The objective of this work was to assess the suitability of corn components other than brewer’s grits to improve the fermentation rates. Water obtained after soaking of corn germ, a vital source of lipids and soluble proteins, was investigated as a source of nutrient during brewing of 40:60 (w/w) corn grits and malt mixture. Performance of water-soluble nutrients from germ of two corn verities, yellow dent corn and flint corn, was investigated. Germ soak water was added during corn grits slurry formation before mashing. The addition of germ water increased the free amino nitrogen levels by 37% and Zn concentrations by 3.6 times in the wort, which resulted in up to a 28% higher fermentation rate (between 48 to 72 h of fermentation) and shortened the fermentation time from 120 to 96 h. The use of water obtained from the soaking of flint corn germ resulted in a similar shortening of fermentation time. In another approach, nutrient-rich concentrated germ soak water was directly added into the wort, which also resulted in similar improvements in the fermentation rate as those from adding germ soak water during slurry formation. Due to leaching of micronutrients and soluble proteins, the oil concentrations in the germ increased by more than 30%, enhancing its economic value.
Keywords: beer; adjuncts; fermentation rate; germ; nutrient; FAN beer; adjuncts; fermentation rate; germ; nutrient; FAN

Starch content in the ground corn grits was determined by the modified acid hydrolysis method [17] and was found to be 79.64%. About 1 g of ground corn grits were mixed with 50 mL of 0.4N HCl in 100-mL autoclavable glass bottles. After mixing, the slurry was autoclaved for 1 h at 126 °C in a laboratory scale autoclave (Napco Model 9000D, Thermo Fisher 157 Scientific, Waltham, MA, USA). Glucose recovery factors were determined using pure glucose and starch samples. After cooling, 1-mL aliquot samples were withdrawn and centrifuged at 1500× g for 5 min (Model 5415 D, Brinkmann–Eppendorf, Hamburg, Germany). The supernatants were analyzed in the HPLC for glucose concentration determination.
Germ (before and after soaking) samples were analyzed for oil (AOAC method 920.39) content by a commercial analytical laboratory (Illinois crop improvement association, Champaign, IL, USA) [18]. All analyses were conducted in duplicates.

A simple schematic of the lab-scale process used for the beverage alcohol production is shown in Figure 1. Corn grits and malt samples were ground in a hammer mill (model MHM4, Glen Mills, 126 Clifton, NJ, USA) equipped with a 1.0-mm sieve. The moisture contents of the ground samples were determined by drying flour at 135 °C for 2 h (Approved Method 44-19, AACC International 2000).
Malt and corn grits were used in 60:40 ratios on a mass basis. Twenty grams (dry weight) of ground corn grits was mixed with a calculated amount of deionized water (for control) or germ soak water (for treatments) to form a slurry with 15% solids, and the pH of the slurry was adjusted to 5.8 (recommended optimum pH for the α-amylase). Germ soak water was obtained by soaking the germ in deionized water (1:10, germ:water on a weight basis) at 52 °C for 12 h, with continuous shaking at 125 rpm. After soaking, the liquid was vacuum-filtered through Whatman No. 4 filter paper and used to make corn slurry. The corn grits starch was liquefied by adding 10 µL of α-amylase and agitating the slurry at 85 °C for 120 min using an infrared heated reactor system equipped with mini-stainless steel tubular reactors that are locked onto a rotating carrousel (Labomat BFA-12, Werner Mathis AG, Switzerland). Simultaneously, 30 g (dry weight) of ground malt was mixed with a calculated amount of deionized water to form a mixture with 20% solids, and incubated at 45 °C for 30 min, with continuous shaking at 125 rpm. After incubation, malt slurry was mixed with the liquefied corn slurry (cooled to 45 °C), and 60 mL of preheated water (45 °C) was added in the mixture. The mixture was heated to 70 °C at the heating rate of 1 °C per minute, and incubated for 60 min in the mini-stainless steel tubular reactors using a Labomat incubator. The mash was cooled down to room temperature and filtered using Whatman No. 4 filter paper to separate liquid (wort) and solids (spent grains). The filtered wort was boiled on a heating plate for about 1 h and filtered again (using Whatman No. 4 filter paper) after cooling. Yeast inoculum was prepared by sprinkling dry yeast in ten times the amount of water and incubating at 23 °C for 20 min, followed by gentle stirring for 30 min. The yeast was inoculated in the wort at the dosage of 100 g/hL, as recommended by the supplier. The fermentation was performed at 15 °C for 144 h with continuous agitating at 125 rpm. About 2 mL of samples were withdrawn every 24 h to monitor the fermentation.

Samples collected during the fermentation process were analyzed for sugars and ethanol concentrations using HPLC, equipped with an ion-exclusion column (Aminex HPX-87H, Bio-Rad, Hercules, CA, USA). The mobile phase used was 50 mM sulfuric acid, eluted at 50 °C and 0.6 mL/min. The amounts of sugars and ethanol were quantified using a refractive index detector and calibration based on pure sugars and ethanol standards.
Ethanol production rates (fermentation rates, %v/v-h) between different time points were calculated using the following equation. where Et2 and Et1 are ethanol concentrations (%v/v) at fermentation times t2 and t1 in hours.

Zn concentrations in the germ water samples were determined using ICP (Inductively Coupled Plasma) analysis, performed in the Microanalysis Laboratory, School of Chemical Sciences at the University of Illinois.

3.3. Use of Concentrated Germ Water in Wort

In the previous experiments, germ water was added during the slurry formation before mashing (Figure 1). To explore the possibility of using these water-soluble nutrients without making many changes in the currently used brewing process, another approach of adding germ water directly in the wort was also investigated. However, the addition of germ water in wort would result in dilution. To provide the same amount of nutrients (as in previous experiments), the addition of germ water (1:10 germ to water ratio soaking) would result in about 40% dilution. This problem was addressed by using germ soak water containing a higher concentration of nutrients. The total FAN in the water obtained from 1:2.5 germ to water ratio (referred as 4X water in the manuscript) was a little more than 4 times the FAN concentration in water from 1:10 germ to water ratio (referred as 1X water in the manuscript) during soaking (Table 1). Due to the high amount of FAN, a relatively small amount of this water would be required to be added to the wort, which would reduce the dilution (only 10%). Further concentration (using less than 2.5 times water) was not possible due to insufficient water available to soak all of the germ. Germ (from yellow dent corn) was soaked in water (1:2.5 germ to water ratio, mass basis) and incubated at 52 °C for 12 h with continuous shaking at 125 rpm. In this experiment, 27 mL of this water was mixed in 265 mL wort, before the boiling step. The rest of the steps were similar to the previous process, as explained in Figure 1. In addition to the current treatment (adding 4X water in wort) and control (no germ water), another treatment (1X water) following the original process (adding germ water from 1:10 germ to water ratio to make corn mash) was also conducted for comparison purposes. To keep the wort concentrations similar in all three cases, 27 mL of deionized water was added in the wort before boiling for control and 1X water. All treatments were conducted in replication.
Figure 6 illustrates the ethanol production rate comparison for three cases: (i) control, (ii) use of germ soak water to make corn mash (1X water), (iii) use of concentrated (4X) germ soak water in the wort. The addition of concentrated germ soak water in wort increased the fermentation rate compared to the control. Both treatments (the addition of 4X water in wort or making corn slurry with germ water) were equally efficient in increasing the fermentation speed. The ethanol concentration was almost the same for both treatments at all the time points. Less than 0.1% (w/v) maltose was observed after 96 h of fermentation, compared to 0.73% (w/v) for the control, for which the maltose concentration was found to be 0.1% after 120 h of fermentation. The fermentation rate was 30% higher than the control between 48 and 72 h of fermentation. These results indicate that germ water can be concentrated and added to the wort to fasten the fermentation.

3.4. Change in Composition of Germ

Corn germ is valuable for its oil content, which directly decides its market value [26]. The extraction of soluble protein and other micronutrients during soaking would increase the oil content in germ and improve its economic value. The oil content of soaked dent corn germ increased by 33% (21.6% to 28.7%, dry basis) compared to raw germ. The increase in oil content of flint corn germ was found to be 29%. Due to increased oil content, the germ would have a higher market price, which could compensate the cost required for soaking and filtration to make germ soak water. The protein content in soaked dent corn germ (14.7%) was 5% less compared to raw germ (15.5%). This reduction in protein content further indicates that soluble proteins were extracted during germ soaking, which enhanced the yeast functioning and fermentation speed.

Due to low protein content, the use of high amounts of corn grits as adjuncts causes nutrient deficiency to yeast during fermentation and leads to sluggish fermentation. This work developed economical process strategies to improve the fermentation rate by providing these nutrients from cereal-based origin. Water obtained from the soaking of corn germ was used as a nutrient source to improve yeast performance during the brewing process using 40% corn grits as adjuncts. The addition of germ water improved the FAN levels in the wort, which enhanced yeast functioning and shortened the fermentation time from 120 to 96 h. The water obtained from flint corn germ had higher amounts of FAN compared to dent corn germ, however, the total maltose consumption time was 96 h in both cases. The study also demonstrated that the nutrients can be concentrated up to 4 times by proportionally decreasing the degree of dilution during the soaking process, and the concentrated water can be added directly to the wort to improve fermentation speed. Soaking of germ increased oil content by 33% in the germ, improving its market value.

Partial funding for this study was provided by Anheuser Busch InBev.

Some of the coauthors (Anna-Sophie Hager, Alberto Sun, Winok Debyser, Bruno Guagliano) are current and former employees of Anheuser Busch InBev. However, in this study a new process was developed and no Anheuser Bush InBev products or processes were evaluated or compared with any other company’s products. 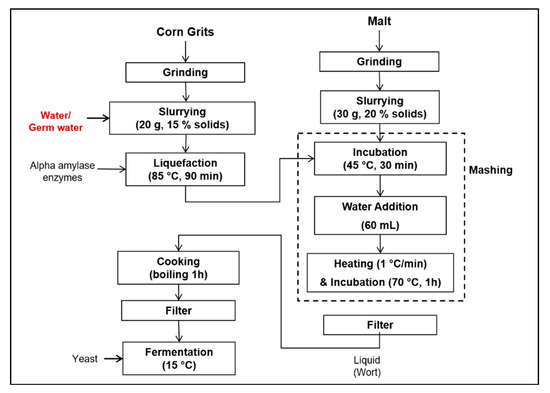 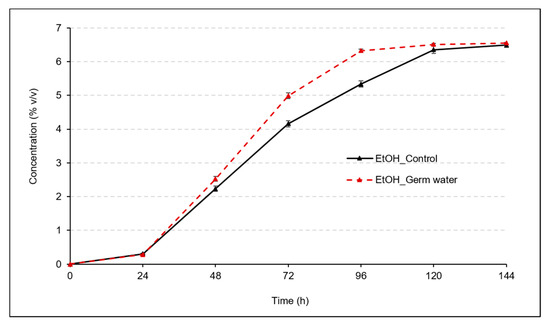 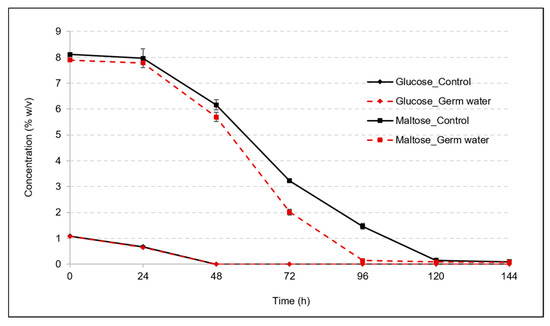 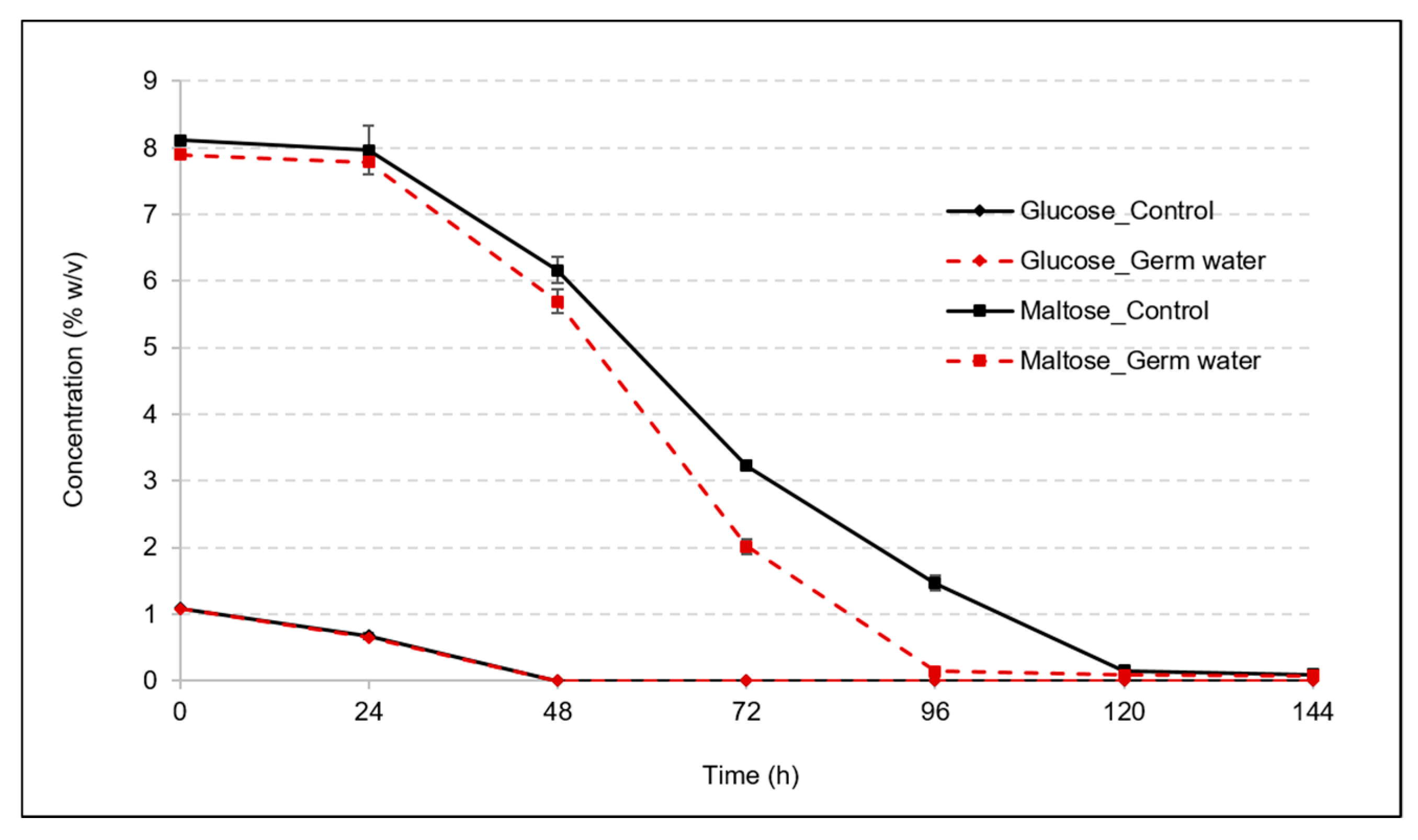 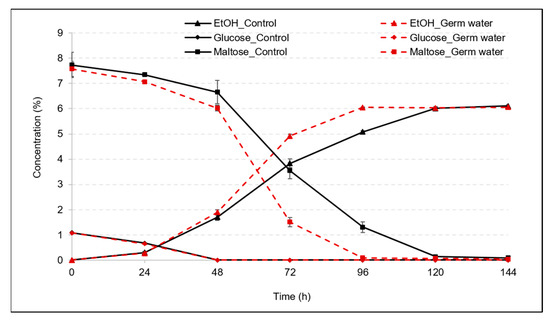 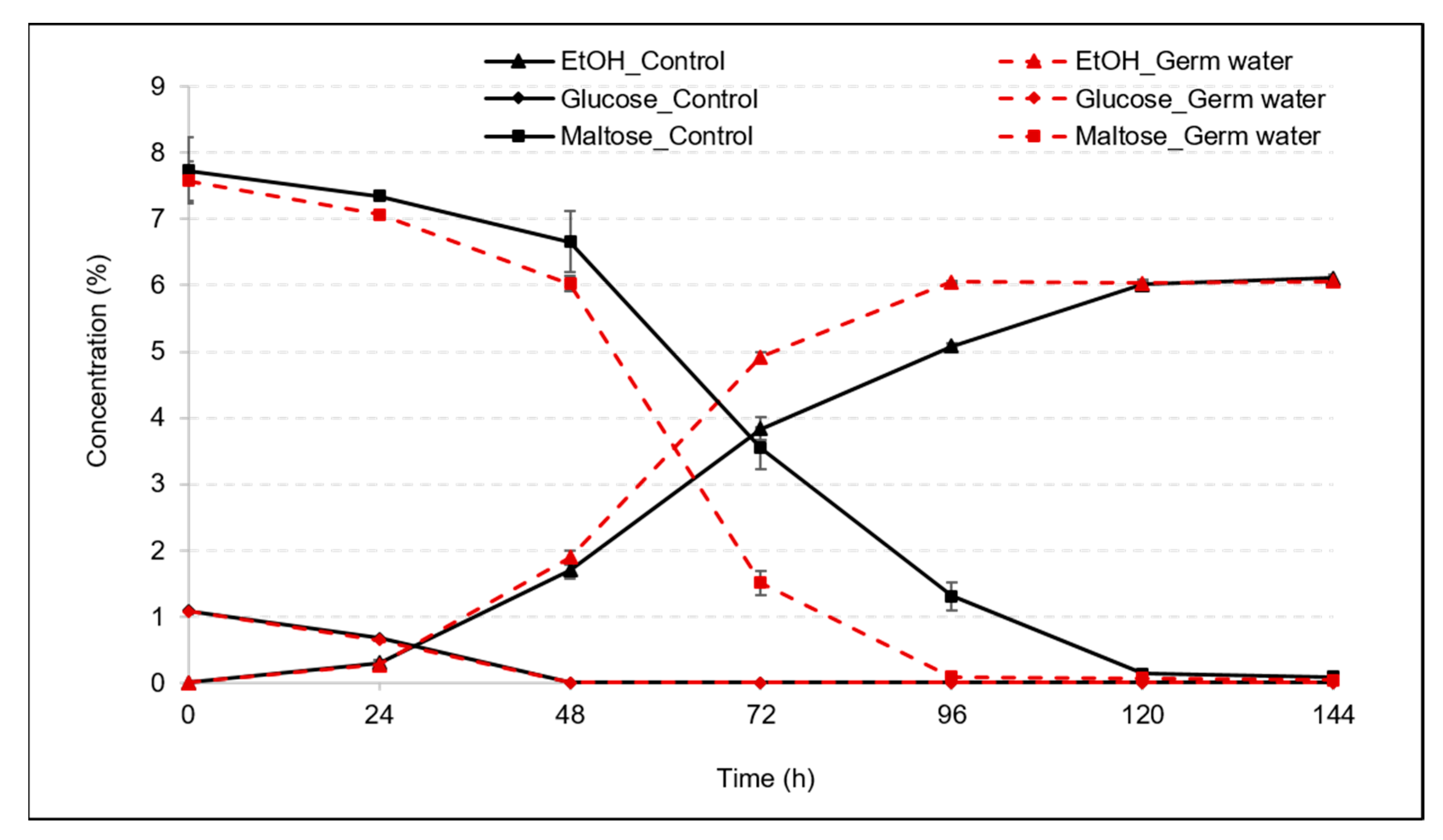 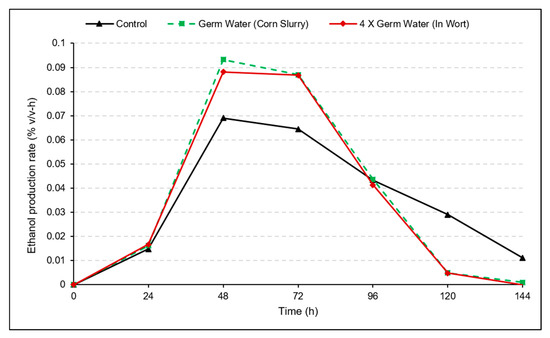