Assessing the Linkage between Exposure to Violence and Victimization, Coping, and Adjustment among Urban Youth: Findings from a Research Study on Adolescents
Next Article in Special Issue

Where are the Ambulatory Care Pediatric Pharmacists?

The GOLDILOKs® (Genomic and Ontogeny-Linked Dose Individualization and cLinical Optimization for KidS) Clinic aims to provide families and physicians with data to make more informed decisions with regard to pharmacological therapy by using innovative therapy and genomic technologies. The objectives are two-fold: (1) To describe the utility of the GOLDILOKs® Clinic to referring prescribers by evaluating the type of referrals made to the GOLDILOKs® Clinic and (2) to assess the most often utilized technologies (e.g., genotyping) completed to formulate therapy recommendations. Patient data from July 2010 to June 2016 was retrospectively reviewed following Institutional Review Board (IRB) approval. The GOLDILOKs® Clinic evaluated 306 patients and had increases in annual referrals from 14 in 2010–2011 to 84 in 2016–2017. The children that were referred were predominately Caucasian (82%) and male (59%) with an average age of 12.4 ± 5.9 years. Subspecialty versus primary care referrals accounted for 82% and 18% of referrals, respectively. Adverse drug reactions (n = 166) and poor medication response (n = 179) were the major reasons for referral. However, it must be noted that patients could have multiple reasons for referral. Pharmacogenetic results were extensively used to provide guidance for future therapy in patients with medication-related problems. Genotyping of drug metabolizing enzymes and drug target receptors was performed in 221 patients (72.2%). Recommendations were fully accepted by 63% and partially accepted by 22% of internal provider referrals. View Full-Text
Keywords: pharmacogenetics; personalized medicine; pediatrics; multidisciplinary clinic; adverse drug reaction pharmacogenetics; personalized medicine; pediatrics; multidisciplinary clinic; adverse drug reaction
►▼ Show Figures 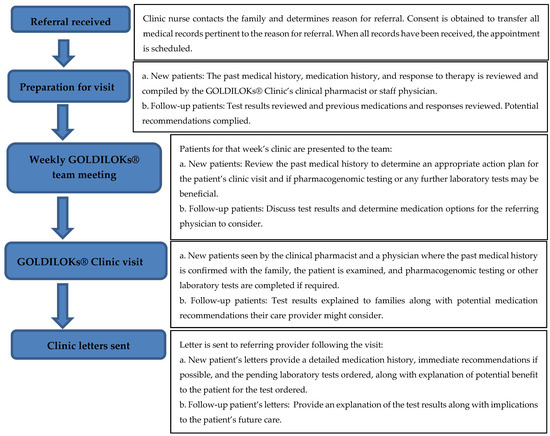