It Takes Two: Dimerization Is Essential for the Broad-Spectrum Predatory and Defensive Activities of the Venom Peptide Mp1a from the Jack Jumper Ant Myrmecia pilosula
Previous Article in Journal

Air Contamination in Different Departments of a Tertiary Hospital. Assessment of Microbial Load and of Antimicrobial Susceptibility
Previous Article in Special Issue

Characterization of Synthetic Tf2 as a NaV1.3 Selective Pharmacological Probe

Phospholipase A2 (PLA2) enzymes are important toxins found in many snake venoms, and they can exhibit a variety of toxic activities including causing hemolysis and/or anticoagulation. In this study, the inhibiting effects of the small molecule PLA2 inhibitor varespladib on snake venom PLA2s was investigated by nanofractionation analytics, which combined chromatography, mass spectrometry (MS), and bioassays. The venoms of the medically important snake species Bothrops asper, Calloselasma rhodostoma, Deinagkistrodon acutus, Daboia russelii, Echis carinatus, Echis ocellatus, and Oxyuranus scutellatus were separated by liquid chromatography (LC) followed by nanofractionation and interrogation of the fractions by a coagulation assay and a PLA2 assay. Next, we assessed the ability of varespladib to inhibit the activity of enzymatic PLA2s and the coagulopathic toxicities induced by fractionated snake venom toxins, and identified these bioactive venom toxins and those inhibited by varespladib by using parallel recorded LC-MS data and proteomics analysis. We demonstrated here that varespladib was not only capable of inhibiting the PLA2 activities of hemotoxic snake venoms, but can also effectively neutralize the coagulopathic toxicities (most profoundly anticoagulation) induced by venom toxins. While varespladib effectively inhibited PLA2 toxins responsible for anticoagulant effects, we also found some evidence that this inhibitory molecule can partially abrogate procoagulant venom effects caused by different toxin families. These findings further emphasize the potential clinical utility of varespladib in mitigating the toxic effects of certain snakebites. View Full-Text
Keywords: varespladib; nanofractionation; PLA2 activity; coagulopathic toxicity; neutralization varespladib; nanofractionation; PLA2 activity; coagulopathic toxicity; neutralization
►▼ Show Figures 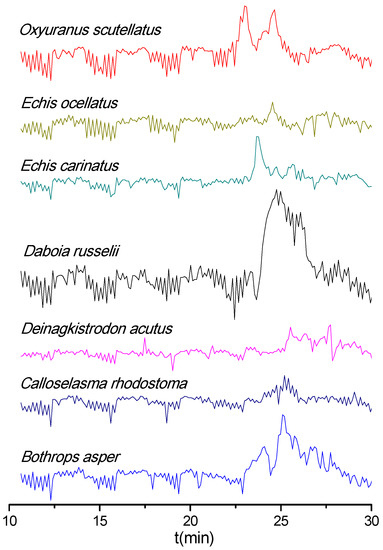