Mediterranean Diet as a Tool to Combat Inflammation and Chronic Diseases. An Overview
Previous Article in Journal

Air Contamination in Different Departments of a Tertiary Hospital. Assessment of Microbial Load and of Antimicrobial Susceptibility

Air contamination in the hospital setting can be a reason for the spread of nosocomial infection among susceptible patients. The aim of this study was to identify bacterial species, and their load and drug resistance, in the air of a tertiary hospital. Air samples were collected on a monthly basis for 12 consecutive months in four different departments of the hospital (Intensive Care Unit (ICU), Internal Medicine Ward (IMW), Surgical Ward (SW), and Neonatal Unit (NU)). In total, 101 samples were collected, out of which 158 Gram-positive (GP) and 44 Gram-negative (GN) strains were isolated. The majority of GP isolates were Staphylococcus spp. (n = 100). The highest total microbial load was reported in the IMW (p = 0.005), while the highest Staphylococcus load was observed in the ICU (p = 0.018). GP bacterial load was higher in autumn, while GN load was higher in spring. Regarding drug resistance, four multi-drug-resistant (MDR) strains and one extensively drug-resistant (XDR) strain were isolated in the ICU, two MDR strains and one XDR strain in the SW, one MDR strain in the IMW and one MDR strain in the NU samples. Air in hospital settings is contaminated with various microbes; some of them are MDR, consisting a potential cause of hospital-acquired infection. View Full-Text
Keywords: hospital hygiene; air contamination; nosocomial infection; drug resistance; microbial load hospital hygiene; air contamination; nosocomial infection; drug resistance; microbial load
►▼ Show Figures 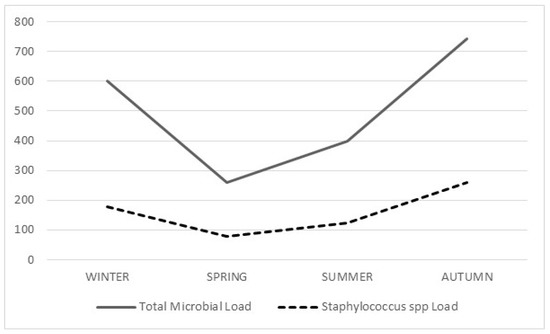