Type 2 diabetes mellitus (T2DM) is a metabolic disorder characterized by impaired insulin action and its secretion. The objectives of the present study were to establish an economical and efficient animal model, mimicking pathophysiology of human T2DM to understand probable molecular mechanisms in context with lipid metabolism. In the present study, male Wistar rats were randomly divided into three groups. Animals were fed with high fat diet (HFD) except healthy control (HC) for 12 weeks. After eight weeks, intra peritoneal glucose tolerance test was performed. After confirmation of glucose intolerance, diabetic control (DC) group was injected with streptozotocin (STZ) (35 mg/kg b.w., i.p.). HFD fed rats showed increase (p ≤ 0.001) in glucose tolerance and HOMA-IR as compared to HC. Diabetes rats showed abnormal (p ≤ 0.001) lipid profile as compared to HC. The hepatocyte expression of transcription factors SREBP-1c and NFκβ, and their target genes were found to be upregulated, while PPAR-γ, CPT1A and FABP expressions were downregulated as compared to the HC. A number of animal models have been raised for studying T2DM, but the study has been restricted to only the biochemical level. The model is validated at biochemical, molecular and histopathological levels, which can be used for screening new therapeutics for the effective management of T2DM. View Full-Text
Keywords: diabetes; dyslipidemia; high fat diet; insulin resistance; T2DM diabetes; dyslipidemia; high fat diet; insulin resistance; T2DM
►▼ Show Figures 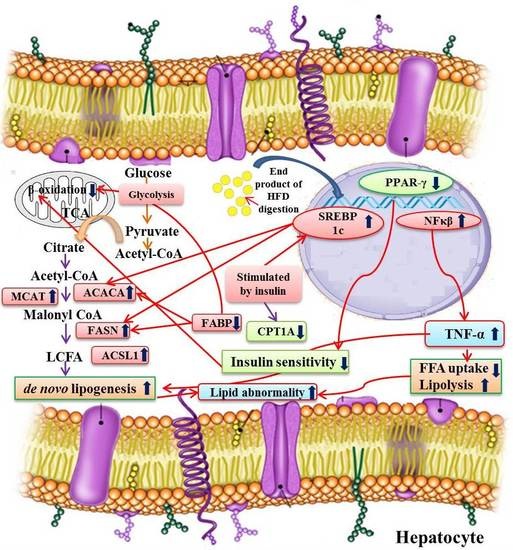