Addition of Care for Transgender-Related Patient Care into Doctorate of Pharmacy Curriculum: Implementation and Preliminary Evaluation
Next Article in Special Issue

The Use of Video Instructions in Patient Education Promoting Correct Technique for Dry Powder Inhalers: An Investigation on Inhaler-Naïve Individuals

Introduction: The correct use of a prescribed inhaler device is crucial for achieving successful disease management in asthma. This study investigates non-verbal, demonstrational videos as a method of teaching inhaler naïve individuals how to use a dry powder inhaler (DPI). Methods: Video instructions for four DPIs were examined using a mixed methodology; 31 inhaler-naïve individuals participated in the study. Participants were each shown a demonstrational video of one the four inhalers, after each video the participant demonstrated how they would use the inhaler. After demonstrating the use, participants crossed over to the next inhaler. The demonstrations were videotaped. A common questionnaire was filled at the beginning of the study and four inhaler-specific questionnaires which were filled out by the participant after each inhaler demonstration. Results: The frequency of participant error varied between inhalers. When asked about how they perceived the video instructions, participants often stated they would have liked to receive feedback on their performance. The importance of feedback was further highlighted by the fact that participants tended to overestimate their own inhaler technique. Conclusion: Non-verbal videos may be more efficient for some DPIs than for others as a method for providing inhaler instructions. Lack of feedback on the participants’ inhaler performance emerged as a clear shortcoming of this educational method. Some steps in the inhalation process may be harder for individuals to remember and therefore require extra emphasis in order to achieve correct inhaler technique. View Full-Text
Keywords: dry powder inhaler; inhaler technique; inhaler education; asthma dry powder inhaler; inhaler technique; inhaler education; asthma
►▼ Show Figures 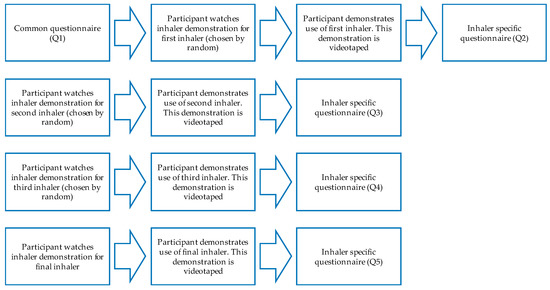