Time to Wake Up: Epigenetic and Small-RNA-Mediated Regulation during Seed Germination
Previous Article in Journal

Avena fatua is an economically detrimental weed found in cereal growing areas worldwide. Knowledge about the variation of dormancy and germination characteristics, as well as of the genetic diversity and structure can provide additional information about different populations within a region. Identification and development of potential indicators or markers of seed germination behavior, would be useful for modelling emergence and seed bank dynamics. This study aimed to describe the initial germination, dormancy, and morphological characteristics of seeds from different Latvian populations of A. fatua and to investigate the genetic structure of local populations. Seed samples from 26 to 41 locations in different regions of Latvia were collected over three years. Seed morphology, initial germination, and the effect of dormancy-breaking treatments were determined. Seeds from 18 Latvian populations with contrasting seed dormancy characteristics were genotyped. Although morphological differences between seeds from different regions were revealed, genetic analysis of the selected populations indicated that the population structure was not related to geographical location, which probably reflects the impact of anthropogenic dispersal of A. fatua seeds. The effect of dormancy-breaking treatments varied between years, between climatic zones and between populations, indicating environmental influences as well as inherited dormancy. View Full-Text
Keywords: dormancy genotyping; gibberellin; iPBS markers; seed morphology; wild oat; weed dormancy genotyping; gibberellin; iPBS markers; seed morphology; wild oat; weed
►▼ Show Figures 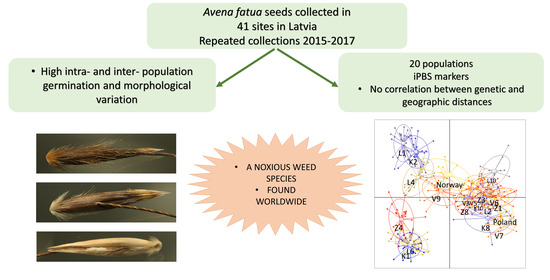 Agnese Gailīte
Post doctoral researcher Agnese Gailīte has a Ph.D. in biology, plant physiology from the University of Latvia. She is a researcher at the Genetic Resource Centre in the LSFRI Silava. She has experience in gene bank management, ex situ conservation, in vitro cultures, endangered species conservation.
Zoom | Orient | As Lines | As Sticks | As Cartoon | As Surface | Previous Scene | Next Scene
We use cookies on our website to ensure you get the best experience. Read more about our cookies here.
Accept
We have just recently launched a new version of our website. Help us to further improve by taking part in this short 5 minute survey here. here.
Never show this again